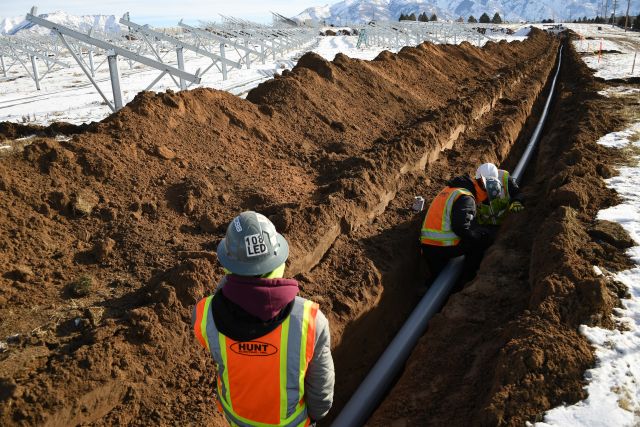 Investing in electric transmission infrastructure can be an engine of U.S. job creation and economic growth. Photo by R. Nial Bradshaw/U.S. Air Force

The COVID-19 pandemic is already affecting the lives of hundreds of thousands of Americans, and it’s poised to get worse before it gets better. Our primary concern is for the health and welfare of all those affected.

The COVID-19 outbreak’s economic impacts will also be staggering and long-lasting. Every sector of the economy – from finance to airlines, retail to restaurants – is feeling the effects. Layoffs are happening across the United States. Jobless claims are skyrocketing.

No doubt, the economic hardships faced by many Americans need to be addressed now. The recently passed $2 trillion stimulus package is a much-needed short-term response. My colleague Dan Lashof recently outlined three principles that should shape how the United States structures its stimulus. As he noted, we need to start looking beyond this immediate crisis to think about the future of the U.S. economy.

U.S. policymakers obviously want to jump-start the economy and are likely to enact additional legislation following the $2 trillion stimulus. As we prioritize economic recovery and job creation, we must do so in a way that simultaneously makes progress on climate goals.

Research shows that better economic growth and a better climate go hand-in-hand. Low-carbon economic expansion can also build domestic markets for low-carbon technologies and increase America’s competitive position through innovation. While rebooting the U.S. economy from the coronavirus fallout, it is also an ideal opportunity to rebuild the economy in a way that will be resilient to future shocks, including from climate change.

For all these reasons, investing in carbon-intensive infrastructure and industries as a way to restore growth at this time would be a short-sighted approach. The International Energy Agency has already raised the warning that COVID-19 is likely to undermine global clean energy investments and weaken the environmental goals of businesses.

There is a better choice to make – one that not only rebuilds the economy, but builds it back better than it was before.

Doubling down on low-carbon investment can, in fact, be one of the solutions to help the U.S. economy by putting into place the kind of job-creating, economic activity-inducing initiatives that can help reverse some of the damages from COVID-19. Here are four key opportunities, among many:

Retrofitting millions of American homes and businesses must play a leading role in putting Americans back to work. Already representing a workforce of nearly 2.4 million Americans, the energy efficiency industry has emerged as the energy sector’s largest job creator. Over the past five years, the energy efficiency sector has produced more jobs than any other sector in energy, adding more than 400,000 jobs. Many of these jobs are local, meaning they are hard to outsource.

There is further opportunity to grow this sector. Improving the efficiency of the nation’s stock of residential and commercial buildings will require a wide variety of measures, such as technologies with higher energy performance, converting fuel-fired heating equipment to comparable systems that run on electricity, and sensors and other “intelligent components” that improve the efficiency of building operations. All this creates the potential to employ hundreds of thousands of workers in every part of the country, especially in the hard-hit construction and manufacturing sectors. Every $1 million investment creates approximately eight full-time jobs in energy efficiency, nearly 3 times the number of jobs created in the fossil fuel sector.

In addition, energy efficiency can save money for both households and businesses through lower energy bills, translating into additional productive spending. These savings are particularly important for low-income households whose budgets are going to be further stretched as a result of the virus-induced economic downturn. For small businesses operating on narrow margins, energy efficiency improvements can potentially save them 10% to 30% in utility costs, improving profitability and enhancing competitiveness. Federal and state leadership will play a vital part in driving America’s energy efficiency economy.

Similarly, investment in the nation’s transmission infrastructure can be an engine of job creation and economic growth.

Extensive investments are needed, not only to replace and/or upgrade the system built 50 years ago, but to respond to a rapidly changing energy mix, including integrating new renewable and distributed energy resources. According to the Brattle Group, the United States will need $30-$90 billion in transmission investments by 2030, and an additional $200-$600 billion between 2030 and 2050. That’s an increase of 20%-50% through 2030 and a 50%-170% increase between 2030 and 2050, compared to investment over the last 10 years.

The benefits of an expanded transmission system will be widespread geographically and occur over a long period. It will make the power system more resilient and lower energy costs for American households and businesses. Modeling results show that every $1 billion of U.S. transmission investment can generate 13,000 full-time-equivalent years of employment and every $1 invested creates $2.40 in economic benefits.

Or take the case of the nation’s public transit system, the network of buses, subways, light rail and commuter rail. Millions of Americans depend on it for access to jobs and other opportunities. The current transportation infrastructure is aging and needs significant investment. In the coming months, the budget of public transit agencies will be further strained due to declining ridership and rising operations costs of sanitizing vehicles and facilities. Increasing federal spending to make smart investments in zero-emission public transportation systems, especially in growing urban areas, can provide a significant boost to the U.S. economy at this crucial time.

The economic benefits from such investments are manifold. In the short-term, local economies would be looking at thousands of construction, equipment manufacturing, and other jobs associated with parts and materials suppliers. In the long-run, analysis from the American Public Transportation Association showed that $232 billion spent over 10 years would generate $928 billion in economic activity over a 20-year period. In other words, every $1 invested in public transportation creates $4 of economic activity in the community. A $1 billion investment in public transit can create more than 50,000 jobs.

There is significant potential for savings, too. In comparison with diesel buses, for instance, electric buses can represent millions of dollars in potential savings for cash-strapped local governments and school districts. The total lifecycle cost of these buses is cheaper than diesel buses, and some of the largest cities in the country have embarked on the path to electrifying their bus fleets. The Chicago Transit Agency added two electric buses to its fleet in 2014. They have saved the agency $24,000 each year in fuel costs and $30,000 annually in maintenance costs, compared to diesel buses purchased in 2014.

Restoring trees to the landscape has the potential to not only create jobs, but also remove gigatons of carbon dioxide from the atmosphere in the coming decades. Trees are a crucial part of the country’s natural infrastructure and among the most powerful tools we have for carbon removal. They also provide other ecosystem services, including climate change resilience and improved air and water quality.

The United States has significant potential for reforestation, silvopasture and other tree restoration practices, but achieving this potential will require public funding to help private landowners defray the costs of planting and maintenance. WRI’s research shows that 60 billion trees can be restored to the landscape with a federal investment of $4-4.5 billion annually over 20 years. That level of investment would go a long way toward fulfilling the U.S. contribution to the Trillion Trees Initiative, which President Trump committed to earlier this year.

The job creation potential associated with this investment can be large. Every $1 million invested in reforestation or forest management can sustain nearly 40 jobs, which translates to more than 150,000 jobs per year with an annual federal investment of $4 billion. Tree restoration can generate many times more jobs than traditional forestry and logging, which employed less than 50,000 people in 2018.

Investment in tree restoration can especially benefit rural communities, whose economies have been lagging behind urban economies for decades and will likely be further disadvantaged by the COVID-19 pandemic. Most trees can be restored in rural areas, including by restocking degraded forests and integrating trees into agricultural lands. Every dollar spent on these tree restoration projects results in between $1.60 and $2.60 of economic activity, helping to boost local economies in struggling rural communities.

In short, investment in the low-carbon economy at this time can create hundreds of thousands of much-needed jobs and foster economic development while reducing emissions. Advanced energy – ranging from electric and plug-in hybrid cars, high-performance buildings, energy-saving industrial processes, wind turbines, onsite and utility-scale solar, and nuclear – is already a significant economic force in the United States, generating $238 billion in revenue in 2018. This is comparable to the revenue of U.S. aerospace manufacturing and double that of the biotechnology industry. More importantly, the advanced energy industry is growing much faster than the overall U.S. economy, generating much optimism about its future. Advanced energy revenue experienced a growth rate nearly 4 times that of the U.S. economy overall in 2018 compared to 2017.

Decisions made today to stimulate economic growth in the aftermath of COVID-19 will have consequences long into the future. We need to choose wisely. Doubling down on the U.S. low-carbon economy can ensure that the economic recovery is successful not only in putting people and industries back to work, but in addressing the climate crisis.

Devashree Saha is a Senior Associate at WRI United States.