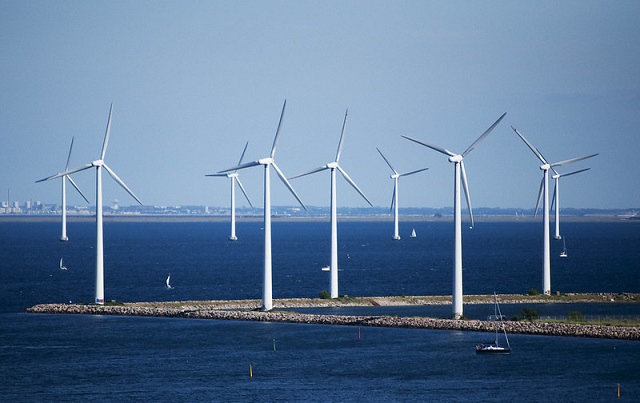 Investing in energy efficiency, like wind power, will be crucial for Europe’s recovery from COVID-19. Photo by CGPGrey.com/Flickr

On May 27, the European Union unveiled a €750 billion ($826 billion) recovery proposal as a centerpiece of its economic response to the coronavirus crisis, while also increasing its existing budget. EU officials have said that 25% of the stimulus package will be set aside for climate-friendly measures like building renovation, clean energy technologies, low-carbon vehicles and sustainable land use. While the climate impact of the rest of the recovery fund remains to be seen, early indications are promising that there will be environmental safeguards.

If climate-friendly spending comprises one quarter of the EU stimulus package, that means it would total more than $200 billion. This would be very encouraging, especially in contrast to the multi-trillion-dollar stimulus packages passed in countries like the U.S. and Japan without any consideration for the climate consequences.

The stimulus package needs to be approved by the European parliament and the 27 member states, so it will almost certainly change substantially before becoming a reality. Differences of opinion on the fundamentals of the EU budget will likely make this a long process. But if a recovery package similar to this proposal eventually goes through, it could be the most significant green investment in history.

Low-carbon investments can help Europe build back better than before, creating jobs, increasing its competitiveness, and building a healthy economy that is more resilient to shocks like pandemics and climate change.

The stimulus package aims to double the annual renovation rate of the existing building stock, as part of a renovation wave. Retrofitting old buildings can quickly stimulate the economy while also reducing building carbon emissions and saving property owners on their electric bills.

Investing in energy efficiency in the EU and elsewhere creates 2.3 times more jobs per dollar than investing in fossil fuels, according to studies of the EU and other countries. Around 6 million EU construction jobs are potentially at risk due to the coronavirus, so investing in building efficiency could help the construction sector rebound, while also offering electricity savings to the hard-hit hospitality sector.

The stimulus package would use several instruments to invest in renewable energy, energy storage, clean hydrogen, batteries, and carbon capture and storage. The renewable market in Europe is expected to shrink 20-33% this year due to coronavirus-related disruptions and stricter financing conditions, so it could use support. Investing in renewable power creates about 2.6 times more jobs per dollar than investing in fossil fuels.

The EU also appears ready to lean into green hydrogen investment, which may be essential to decarbonize heavy industries like cement and steel production. If the EU makes clean technology investments a priority in its recovery fund, it could become a world leader in the technology.

The stimulus package proposes installing 1 million electric vehicle charging points in the EU, compared to less than 200,000 today. It also plans to support cities and companies in turning over their vehicle fleets for low-carbon options and building sustainable transport infrastructure.

The upfront purchase costs of large electric vehicles in the EU are expected to be competitive with traditional vehicles without subsidies by 2022. Support from the stimulus package could bring that date even closer.

The stimulus package proposes an increase of $16 billion for a fund that supports rural agricultural development and sustainability. This will support the EU Farm to Fork strategy that was announced a week before the stimulus package. It aims for 50% reductions in pesticides and antimicrobials, a 20% reduction in fertilizer use, a 50% reduction in food waste, a shift to healthier and more sustainable diets, improvements to fisheries management and aquaculture, and other commendable goals.

Similarly, the EU Biodiversity Strategy aims to protect 30% of EU lands and seas to halt the decline in wildlife, while planting 3 billion trees. Shifts toward lower-impact forms of agriculture will be important. Still, care should be taken to also enhance overall agricultural productivity, to avoid the need to convert natural ecosystems to farms, which would cause biodiversity losses and increase emissions outside of the EU.

The stimulus package would support workers and communities affected by the energy transition – including those historically reliant on fossil fuels – by investing $44 billion in the EU’s Just Transition Fund to leverage more in private investment. This will support workers who lose their jobs, help teach them new skills and help small businesses create new economic opportunities.

This is a welcome investment. While the green economy will create millions of jobs, there will also be job losses in carbon-intensive sectors of the economy. Those workers and communities deserve support.

Experience has shown that just because money is allocated to a sector labeled as green, that does not mean that the investment will reduce emissions. Green spending must be in alignment with a long-term, zero-carbon economy, and the rest of the stimulus package must not provide support to the existing high-carbon economy without conditions.

Thankfully, the EU proposal asserts that public investments should do no harm, which would rule out any direct spending on fossil fuels in the rest of the stimulus package. It also says that the investments will have to be in line with the EU’s long-term ambitions and its sustainable finance taxonomy. This is encouraging, as it means that the entire stimulus package must be in alignment with achieving net-zero emissions by 2050.

The EU has been explicit that it will not slow down its work to prepare for an ambitious COP26, and it is preparing for an impact assessment of an enhancement in its 2030 climate targets. As the EU moves forward with this proposal, it should make it even more clear that high-carbon investments are off the table. It could also follow Canada’s example and require any businesses that receive stimulus support to report on how their operations are affected by climate change risks and how they will support long-term climate plans.

Low-carbon investments must be part of a broader shift toward a more inclusive and sustainable growth path. Stimulus packages should be accompanied by other reforms and changes in the economy.

For example, EU countries still provided $61 billion in fossil fuel subsidies in 2016, even though the EU has long pledged to remove them. They must be ended, or else they will counter-act the green investments proposed. It’s a good time to do so, when fossil fuel prices are low.

The EU has also proposed expanding its emissions trading system to new sectors like international maritime transport and land transport. Incorporating new sectors and setting a low enough emissions cap could reduce emissions, raise revenue, and help the EU pay for this stimulus plan later on.

The Benefits of Green Recovery Spending

The EU economic recovery proposal says that achieving emissions reduction and energy targets could add 1% to the EU’s GDP and create almost 1 million new green jobs over the next decade, while investing in a circular economy could add another 700,000 jobs.

Experts agree that green coronavirus recovery packages can both boost economic growth and tackle climate change at the same time. A recent study reviewed the literature and surveyed more than 200 economic experts and central bank officials to identify five investments for an economic recovery that can both improve the economy and reduce emissions.

The final recommendations were clean infrastructure investment, building efficiency, education and training, sustainable land use, and clean research and development spending. The EU economic recovery proposal includes investments in all these areas.

Beyond the EU economic recovery package, several European countries are already pursuing efforts to build back in a sustainable way.

France has made an $11 billion bailout to Air France conditional on reducing domestic emissions by 50% by 2024. It is also considering a plan to support its auto industry, which will come with support for low-carbon vehicles. Denmark plans to allocate more than $4 billion for green renovations to social housing, targeting 72,000 homes and seeking to increase employment opportunities. The UK has launched a $44 billion Clean Growth Fund for R&D in green technology for power, transport, waste, and building energy efficiency.

One of the most encouraging signs was from Spain, which recently presented new draft legislation to reduce its carbon emissions to net-zero by 2050. If approved by the Spanish parliament, the law would create concrete measures to get to net-zero, including banning new coal, oil and gas extraction immediately, removing all direct fossil fuel subsidies and making all new vehicles zero-emissions by 2040.

However, not all new policies in Europe have been as promising.

For example, the UK extended a $740 million loan to EasyJet without including any conditions for the airline to improve its carbon footprint. Greece has updated its environmental rules, which will help boost renewables, but will also allow oil and gas exploration in protected areas.

Ultimately, the impact of these measures will be important, but small compared to the stimulus package the EU is contemplating. As the details of this recovery plan are hashed out in the next few weeks, the EU should ensure the green elements end up being as strong or stronger than what was proposed.