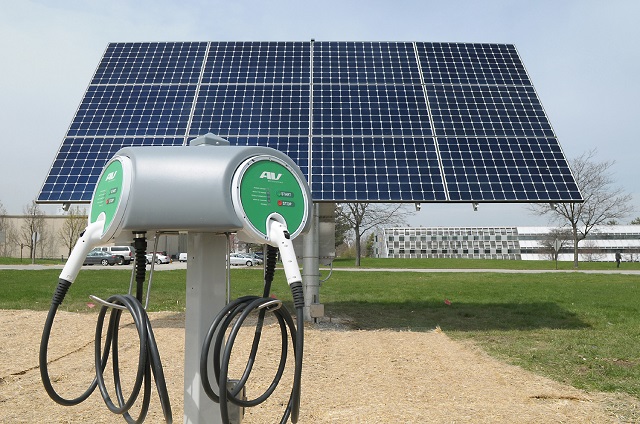 Today, transportation accounts for almost 30% of all greenhouse gas (GHG) emissions in the United States.

The good news is that passenger vehicles in the U.S. are electrifying at an unprecedented rate. In 2018, one million electric vehicles (EVs) were on the road, and recent studies project that by 2030, approximately 20 million EVs will be deployed across the country. Globally, this number could surpass 250 million EVs by 2030, according to the International Energy Agency (IEA).

Though EVs are two to three times more efficient than conventional gasoline-powered vehicles and have no emissions at the tailpipe, the reduction in GHG emissions and overall air quality benefits they bring depend on the mix of generation sources on the grid used to charge them. In some cases, EVs could result in substantial GHG emissions or even help extend the life of fossil fuels, if charged primarily with fossil fuel-based generators. One study found that in China, EVs can contribute two to five times more smog than gasoline-powered vehicles, due to the country’s reliance on a coal-fired grid.

Acknowledging this, several utilities, automakers, cities and EV charging providers across the U.S. are rolling out new pilot programs and services that allow residential and commercial customers to use renewable energy for their EVs’ electricity needs and charge at times that help integrate more renewable energy sources on the grid. Daytime charging syncs with peak solar output, while nighttime charging can often align well with wind output. Below, we explore some of the charging options currently offered, primarily highlighting examples that look to match the timing of EV charging with renewable energy generation more closely.

In some cases, customers can access a network of stations to charge their EVs with renewable energy. Austin Energy has developed a network charging program, called the Plug-in EVerywhere Network, that allows customers to source 100% of their charging electricity from wind – for $4.17 a month, customers have unlimited access to more than 800 charging stations within the city’s network. Approximately 35% of EV owners within Austin Energy’s service area participate in this program. In addition, Austin offered a pilot that encouraged off-peak charging at home at night and on weekends, in addition to the network charging.

Earlier this year, EVgo, a national fast charging network company, announced plans to power its EV charging network with 100% wind or solar energy. To participate, customers can enroll either in a pay-as-you-go plan, which tabs customers per minute charged, or in a membership plan that charges a fixed rate per month.

Through managed charging programs, customers, utilities or even automakers can control the timing of EV charging to align with clean energy availability and grid needs, while still meeting customer needs. In a pilot program called Charge Forward, run by Pacific Gas & Electric and BMW in April 2018, customers agreed to delay charging for up to an hour each day to better align with available renewable energy, in exchange for lower charging rates.

EV charging can be paired with on-site renewable energy generation – most commonly by co-locating EVs with on-site solar energy systems, and in some cases batteries, either with or without managed charging.

Starting in 2012, San Diego Gas & Electric, in partnership with the City of San Diego and other actors, implemented a pilot project at the San Diego Zoo, where 10 solar photovoltaic (PV) canopies were installed. This program gives customers access to five charging stations and, when not in use, the solar energy is stored in a battery system. Similarly, Google also powers a portion of the 750 charging stations designated for its employees with the solar energy generated by their own PV systems.

Some utilities offer discounts to customers willing to charge when renewable energy is being generated. In January 2019, Southern California Edison introduced a time-based rate that encourages customers to charge on weekdays and during off-peak hours on weekends, when solar is abundant (8 a.m. to 4 p.m.) and then again at night (9 p.m. to 8 a.m.) when wind is often available. Enrollment in this rate has a fixed daily charge of $0.40, and also offers discounted rates at $0.13 per kilowatt-hour (kWh), compared to the standard $0.27-0.38 per kWh rates during on-peak periods.

Electric Vehicles Are Coming. Are We Ready?

Many cities, states and companies have established goals to convert their vehicle fleets to EVs and power them with clean energy sources. Amazon recently announced plans to purchase 100,000 electric vans as part of its commitment to go carbon neutral by 2040, while cities such as Cambridge and Portland have pledged to 100% renewable-powered, community-wide transportation by 2035 and 2050, respectively.

With this number of EVs coming online in the coming years, it is crucial that both customers and utilities continue to explore new ways to charge EVs with renewable energy sources in order to maximize emissions reductions. EV charging can also be an important source of flexible electricity demand to enable use of larger amounts of variable solar and wind energy on the grid. New utility and third-party offerings are emerging to enable customers to opt for renewable energy to meet charging needs, but these are not available everywhere – new programs and solutions must be designed to enable customers to align charging to when clean energy sources are available and offer customers savings when they provide grid benefits.

For a more in-depth view of the range of different approaches and emerging program designs currently in market, download our publication, “Using Renewables for Electric Vehicle Demand: A Review Of Utility Program Designs & Implementation Strategies.”

Lori Bird is Director of WRI’s U.S. Energy Program and the Polsky Chair for Renewable Energy.

Norma Hutchinson is a Research Analyst for the Energy Program at World Resources Institute.