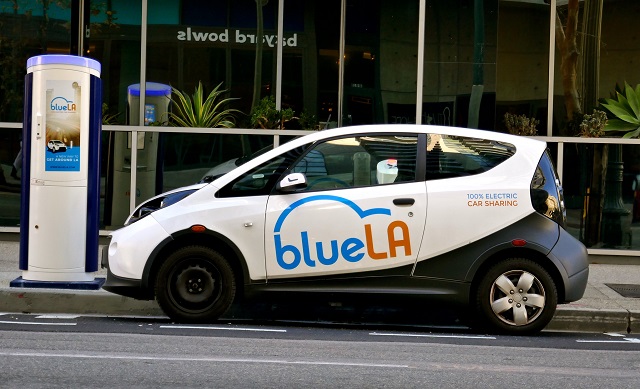 Affordable electric car-sharing service BlueLA is one of California’s many initiatives to improve access to electric vehicles among low-income communities. Photo by Ali Eminov/Flickr

California is home to 7 of the 10 most polluted metropolitan areas in the United States, with transportation being the state’s leading source of greenhouse gases. While pollution from the transport sector is bad for everyone, it disproportionately impacts people of color and low-income residents. Much of this disparity is due to California’s historic redlining and discriminatory land use policies that forced poor residents and people of color to live near freeways, urban freight routes and factories.

But recently, partly in response to this legacy and partly in response to pressure from residents and workers, the state has emerged as a leader in policies that place equity and environmental justice at the forefront, and it is now incorporating equity concerns into its push to electrify transport. While electric vehicles (EVs) cannot undo systemic inequalities, they can help reduce some of the health disparities among marginalized groups in the state.

With zero tailpipe emissions and reduced emissions across a vehicle’s lifetime, EVs can help meet climate goals and improve local air quality. California is working to extend these benefits to communities most in need. Prioritized groups include low-income Californians and disadvantaged communities (DACs) – state census tracts that are especially polluted and vulnerable to the effects of climate change, and where African-Americans and Latinos are over-represented.

African Americans are exposed to 43% more micro particulate pollution (PM2.5) from vehicles than white Californians; Latinos 39% more; and Asians 21% more. Households earning less than $20,000 per year are exposed to 10% more PM2.5 than the state average, and 25% more than the wealthiest Californian households.

The following examples of California’s pro-equity EV policies demonstrate to other state and national governments that if electrification is implemented with local equity considerations in mind, residents who are most vulnerable to the negative impacts of vehicle emissions can benefit the most.

The California Clean Vehicle Rebate is a means-tested refund (i.e., based on income) mailed directly to customers upon purchase of an eligible EV. The rebate ranges from $900 to $4,500, with an additional $2,500 rebate for individuals with incomes below 300% of the federal poverty line. The rebate addresses a shortcoming of the federal tax credit for EVs, which excludes many low-income consumers because they don’t have tax liability.

Since the policy was amended to include the income criteria in 2016, more than 16,000 of the increased rebates have been given to low- and -moderate income consumers. About 27,000 rebates have gone to people living in DACs, 62% of whom said in a survey that they would not have bought an EV without the rebate.

While upfront costs of EVs remain prohibitive for many, a pilot program in San Diego County has set up a pre-approval system for individuals looking to purchase EVs, in which the rebate is applied for them at the point of sale at participating dealerships. This expands access to customers who could not otherwise front the costs of an EV before the rebate is disbursed. The pilot, which began in 2018 and is soon expected to roll out statewide, has resulted in a significant jump in the number of rebates given out each month in San Diego County. 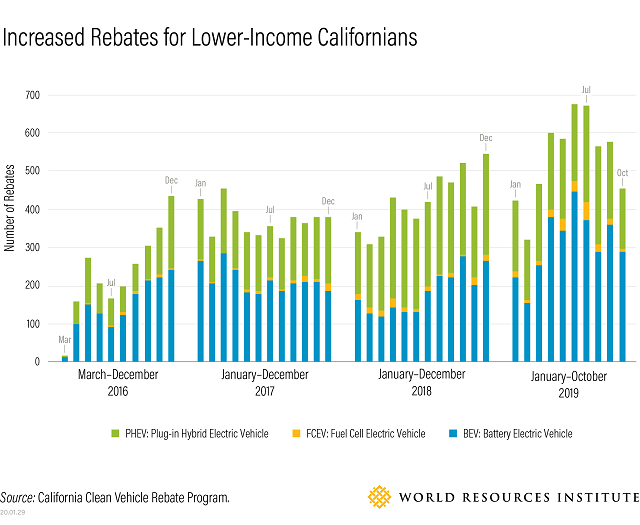 One of the largest barriers to EV adoption is lack of access to a place to charge. Homeowners are far more likely to own EVs than renters, because they are more likely than renters to have the space and resources to install a charging station. Low-income Californians often rent in multi-unit buildings that either don’t allow or lack space to install charging stations. To address this, the California Building Standards Commission now requires new multi-unit dwellings to include electric wiring that supports EV charging in at least 10% of parking spaces.

In many counties in California, utilities are leading the effort to expand access by installing charging stations in DACs, which the state requires the companies to prioritize in their transport electrification plans. San Diego’s Power Your Drive program provides charger installation and maintenance at no cost in low-income areas. The three largest utilities in California – San Diego Gas & Electric, Southern California Edison and Pacific Gas & Electric – have installed between a quarter and half of their charging ports in DACs.

Municipalities have also pushed for equity through their public EV fleets. Sacramento’s zero emissions initiative, for example, used money from the Volkswagen Clean Air Act settlement to introduce electric shuttle buses. These buses will run on Franklin Boulevard, a corridor that comprises more than 90% DAC census tracts and hasn’t had bus service since 2008.

In addition, both Sacramento and Los Angeles have launched electric car-sharing programs targeted at low-income communities. BlueLA is an affordable electric car-sharing service with pick-up spots intentionally placed in low-income areas. Since its inception in April 2018, the program has enrolled almost 2,000 members and has served more than 12,000 trips. Similarly, the city of Sacramento has partnered with private car-sharing companies Envoy and Gig to station EVs in affordable housing developments.

As California’s electric vehicle ecosystem continues to expand, equity-focused policies and programs will evolve. Future equity considerations could include the environmental and health impacts at electricity generation sites and labor practices throughout the electric vehicle and battery supply chain.

While these programs in California are still somewhat experimental, they provide a useful framework for governments around the world that want to make EVs work for everyone.

Pallavi Panyam is a former intern with the Global Electric Mobility team at WRI Ross Center for Sustainable Cities. She currently works in the Livable Streets division of the San Francisco Municipal Transportation Agency.