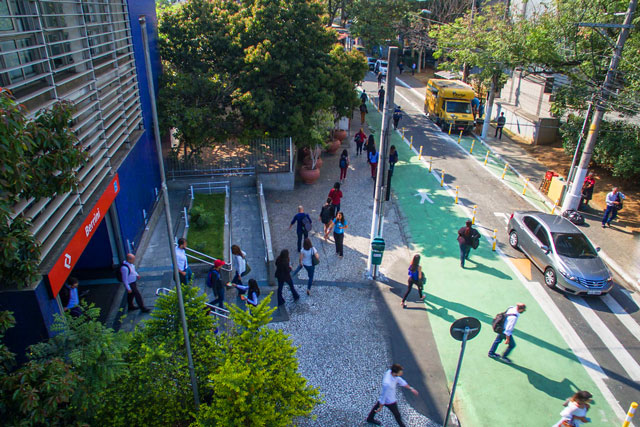 With a population of 12.2 million – eighth largest in the world – São Paulo faces a daunting task in making its streets safe for all. But in April 2019, the city pledged to do just that, becoming the first Brazilian city to adopt a road safety plan based on the “Safe System” approach.

Developed with the technical support of WRI Ross Center along with the World Bank’s Global Road Safety Facility and the Bloomberg Initiative for Global Road Safety, the Vida Segura (or “Safe Life”) plan solidifies the city’s place at the forefront of road safety leadership and heralds a bold new goal: Reduce the traffic fatality rate by more than half in 10 years, to 3 deaths per 100,000 people. This would put São Paulo among the safest cities in the world.

In recognizing that no traffic fatality is acceptable, São Paulo demonstrates its shift to the Safe System mentality: Instead of solely trying to make individuals more obedient to traffic rules, the city has begun prioritizing integrated actions that make the entire mobility system safer and able to forgive human error.

Data collection and processing is critical to ensuring more evidence-based road safety management and quality analysis of problems. One of the innovative aspects of São Paulo’s plan is making data from municipal radar equipment public, from traffic levels to real-time vehicle speeds. This data will be available on an open digital platform so it can be used by the private sector and civil society to monitor progress, develop innovative solutions and advocate for improvements.

2. Redesigning Streets for the Most Vulnerable

Fundamental to the Safe System approach is the redesign of physical environments to protect the most vulnerable road users.

These interventions have already been successfully deployed in the busy M’Boi Mirim Corridor, where improvements in road design, signage, crossing times and other areas resulted in a 68% reduction in fatalities in just one year. 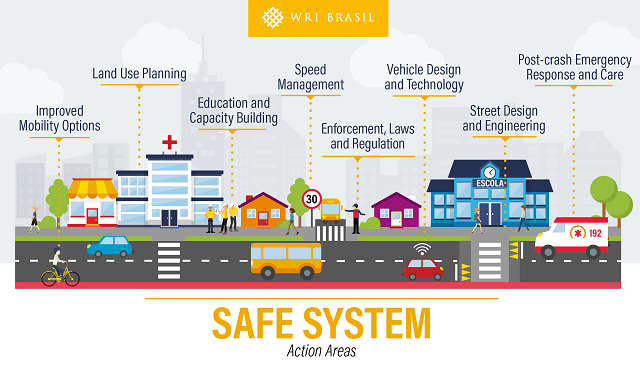 Most Brazilian cities classify their roads as local, collector, arterial or highway for the benefit of the maximum flow of vehicles, without adequately considering the needs of other road users.

In the Vida Segura Plan, São Paulo has committed to reviewing the classifications of its roads according to the Safe System approach, prioritizing the safety of all users instead of just vehicles. In keeping with the World Health Organization’s recommendation to limit maximum speeds to 50 kilometers per hour within the urban perimeter, the city plans to set that maximum speed limit for arterial roads, dropping it to 40 kilometers per hour for collector roads, and 30 kilometers per hour for local. High-speed roads that lack safe infrastructure for pedestrians and other non-vehicle users will be reclassified as arterials.

The city also plans to build on the low-speed zone projects it has started in the São Miguel Paulista and Santana neighborhoods. These low-speed zones, focused in areas of high pedestrian circulation like neighborhood centers, will feature a maximum speed limit of 30 kilometers per hour and street redesigns that improve pedestrian safety. 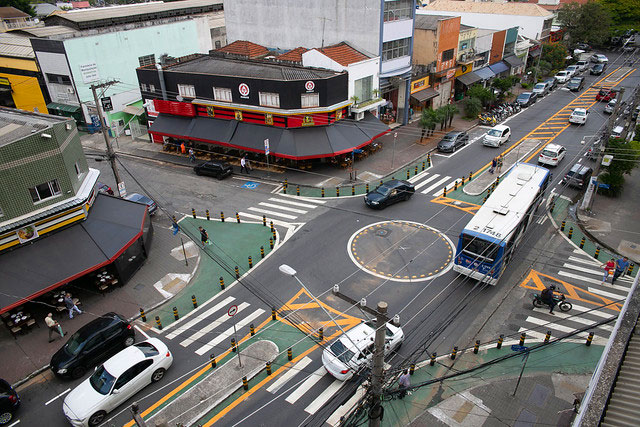 A redesigned intersection in the Santana neighborhood. Photo by Joana Oliveira/WRI Brasil

Adopting such a significant shift in road safety strategy will demand a consistent and large-scale communications effort on the city’s part to educate citizens on planned changes and generate support.

City staff – from decision-makers, to architects, to planners – will also need to be trained to develop their activities according to the Safe System approach and to help implement new measures like road safety audits. While most Brazilian cities still lack capacity for road safety audits, São Paulo plans to use them to identify safety issues with existing projects and roadways and to provide recommendations for mitigating risks at key sites.

With Vida Segura, São Paulo has taken a big step in the right direction, setting out lines of action that each new mayor is responsible for implementing and evolving with new targets. Now, it’s left to put in consistent, long-term effort to make that vision a reality.

Halving the traffic mortality rate in 10 years would bring the city close to the safety levels of much smaller cities in Sweden and the Netherlands today, which adopted the Safe System approach decades ago. It would establish São Paulo as a leader in safe streets for Brazil and the world. Indeed, the plan commits São Paulo not only to creating safer streets but to maintaining a healthier, more people-focused city for all.

Marta Obelheiro is a Road Safety Coordinator at WRI Brasil.

Diogo Lemos is a Road Safety Analyst at WRI Brasil.

Bruno Felin is a Communications Specialist at WRI Brasil.