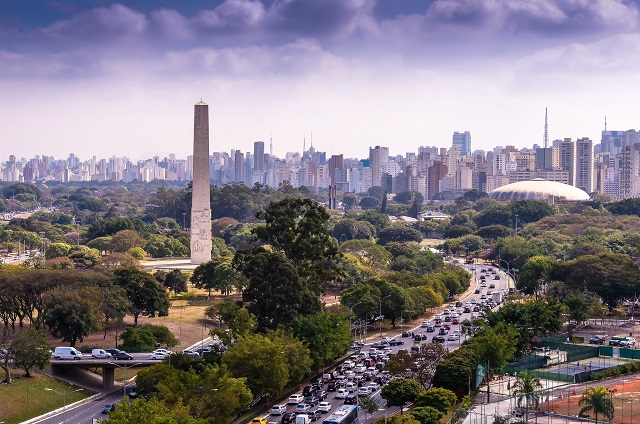 The São Paulo skyline behind Ibirapuera Park. The city’s urban trees are part of the greater Atlantic Forest ecosystem, critical to the region’s health and sustainability. Photo by Flávio Jota de Paula/Flickr

What if you could send a WhatsApp message and a colorful green van would deliver free native tree seedlings directly to you? In Salvador, Brazil, the local government does just that. Painted with a picture of a biodiverse Brazilian forest, this tree van is part of the city’s “Disque Mata Atlântica,” or “Dial Atlantic Forest” program. Since launching in 2017, the program has delivered 4,500 trees for excited residents to plant at home.

This is one of many innovative programs piloted by Salvador’s Municipal Secretary of Sustainability, Innovation and Resilience to boost awareness of the critical roles trees play in cities ‒ not just urban trees within city limits, but the forests outside of them as well.

To the south of Salvador, São Paulo is also working to plant trees and preserve forests. Although much seems to separate these two cities ‒ from their wealth disparity to the starkly different political parties that run them ‒ they are connected by one of Brazil’s most threatened ecosystems.

It’s not the Amazon, but the lesser-known Atlantic Forest. Even the cities’ urban trees are part of this larger forest ecosystem. 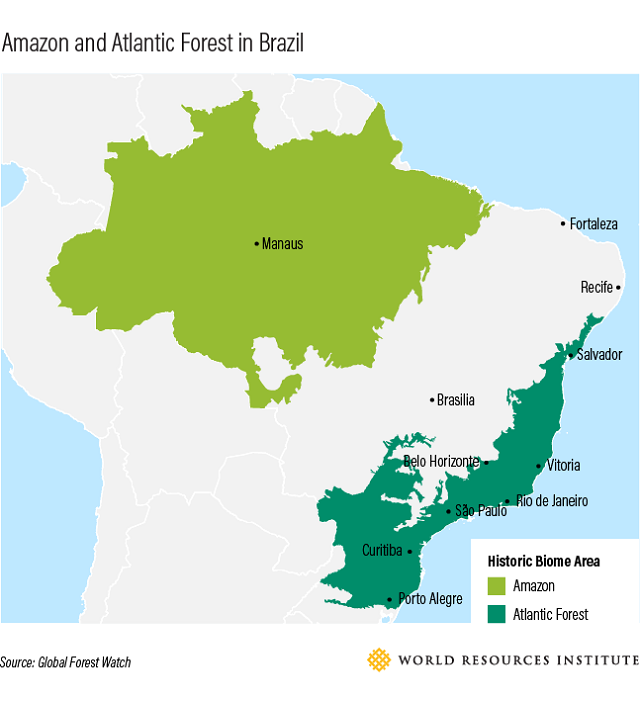 Salvador and São Paulo have both committed to protecting and restoring the Atlantic Forest, which has suffered from severe deforestation. Today, less than 20% of the original forest remains. The two cities recognize the forest’s benefits to people, such as ensuring a consistent and clean water supply, regulating temperature, purifying the air, improving hydroelectric generation, limiting flooding, safeguarding unique plant and animal species, and encouraging local economic development.

While Salvador and São Paulo are obligated by Brazil’s national Forest Code and a 2006 federal law to protect the Atlantic Forest, they have developed their own local frameworks to go beyond the national requirements. From urban trees in parks and on streets, to nearby areas of forest that protect water supplies, to faraway areas that store carbon and safeguard biodiversity, these cities are supporting the greater Atlantic Forest that they rely on.

Urban Trees in Parks and on Streets

Beyond the city’s Dial Atlantic Forest program, Salvador has planted over 51,230 trees, revitalized and expanded local parks and protected areas, and created user-friendly manuals on planting tree species native to the Atlantic Forest in urban areas. 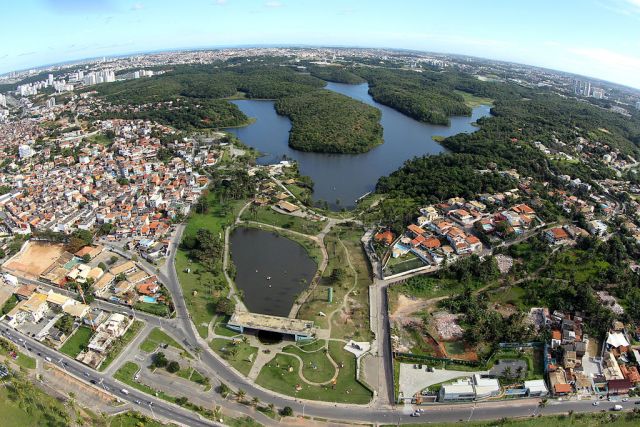 Salvador’s city government is expanding parks and encouraging residents to plant native trees, in an effort to revitalize the surrounding Atlantic Forest. Photo by Manu Dias/SECOM

In 2016, São Paulo launched an in-depth analysis of the city’s Atlantic Forest area. To better connect these green spaces, São Paulo has now expanded its parks and protected areas to cover more than a fifth of its total land area. And it’s not stopping there. Over the last three years, the city has planted an average of 59,000 trees each year. This August, officials posted additional plans to improve a half dozen of the city’s parks online for public comment ‒ including Ibirapuera park, which boasts 14 million annual visitors.

The Atlantic Forest ecosystem supplies water to more than 63 million people in and near São Paulo. The city is under high water stress according to new data from WRI’s Aqueduct Water Risk Atlas. However, a recent report found that restoring 4,000 hectares in São Paulo’s nearby forest watershed could improve water quality, cut sediment pollution by a third, and increase water supply during the dry season, all while generating a 28% return on investment for the local water company. As a result, key stakeholders are working together to raise finance to restore the watershed. There is high potential to take similar steps in Salvador’s watershed as well.

Civil society and sustainable businesses are also leading the way. Through Initiative 20×20 (a country-led effort to restore degraded land across Latin America and the Caribbean), Symbiosis Investimentos is protecting natural forests and limiting soil erosion in Bahia state, where Salvador is located. The company runs a biodiverse timber operation, planting a variety of native trees and restoring additional land outside the areas it harvests. Near São Paulo, Floresta Viva is growing sustainable heart-of-palm, replacing the existing chemical-intensive palm plantations with soil-restoring diversity that more closely mimics the forest ecosystem.

While the Amazon tends to grab the attention of global news media, the Atlantic Forest also provides critical ecosystem services for São Paulo, Salvador and cities around the world. The forest is home to over 20,000 species of plants, including hundreds of tree species. The Atlantic Forest contributes massively to the fight against climate change by storing an amount of carbon equivalent to what the United States emits every year. 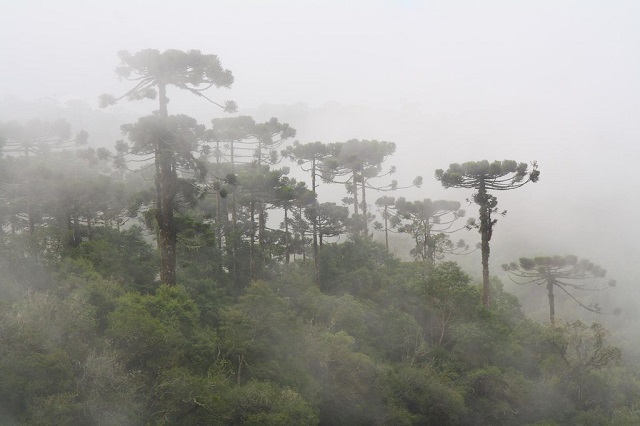 Today, a mere 7% of the Atlantic Forest remains in good condition, but Brazilians are making significant efforts to restore it. The São Paulo state government has pledged to restore 300,000 hectares of degraded land in the Atlantic Forest. The Atlantic Forest Restoration Pact ‒ a multi-stakeholder movement comprised of NGOs, universities, businesses like Salvador-based pulp and paper company Suzano, and government agencies like the Secretary of the Environment of the State of São Paulo ‒ has shown that various groups restored around 700,000 hectares of native forests between 2011 to 2015. By 2020, a total of 1.4 million hectares could be recovered.

This success is in part due to a bottom-up movement that engages and builds the capacity of local and regional actors around a common goal. If cities with strong policies like Salvador and São Paulo continue to band together with rural municipalities to protect and restore the Atlantic Forest, the future of the forest will look bright.

The Power of Cities to Protect Forests

By working together, cities can implement local strategies that help ensure global and national goals to end deforestation, restore forests and fight climate change succeed on the ground. Because Salvador and São Paulo’s residents rely on the same forest for the air they breathe, the electricity they consume and the water they drink, they have significant ground for collaboration.

In fact, seven other Brazilian cities have joined Salvador and São Paulo in Cities4Forests, an international initiative focused on helping cities better conserve, manage and restore forests. Efforts like these contribute to Brazil’s national forest and landscape restoration goals under Initiative 20×20 and the global Bonn Challenge.

Salvador and São Paulo’s innovative approaches signal that, in the face of the climate crisis and multiple environmental challenges, involving cities may be the best opportunity to protect and restore critical ecosystems.

Sabin Ray is a Research Analyst II for Cities4Forests at World Resources Institute.

Will Anderson is the Communications Specialist for the Global Restoration Initiative at World Resources Institute.