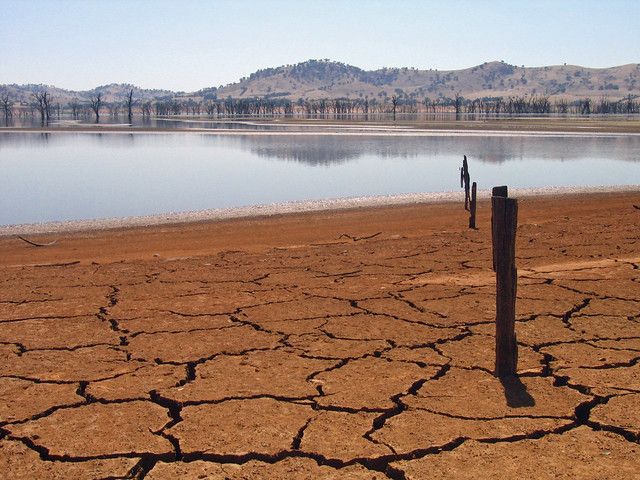 Water withdrawals globally have more than doubled since the 1960s due to increased demand. Photo by Tim J. Keegan/Flickr

The reasons for these crises go far deeper than drought: Through new hydrological models, WRI found that water withdrawals globally have more than doubled since the 1960s due to growing demand – and they show no signs of slowing down.

New data from WRI’s Aqueduct tools reveal that 17 countries – home to one-quarter of the world’s population – face “extremely high” levels of baseline water stress, where irrigated agriculture, industries and municipalities withdraw more than 80% of their available supply on average every year. Forty-four countries, home to one-third of the world, face “high” levels of stress, where on average more than 40% of available supply is withdrawn every year. (Check your country’s water stress level in the full rankings at the end of this post.) Such a narrow gap between supply and demand leaves countries vulnerable to fluctuations like droughts or increased water withdrawals, which is why we’re seeing more and more communities facing their own “Day Zeros” and other crises. 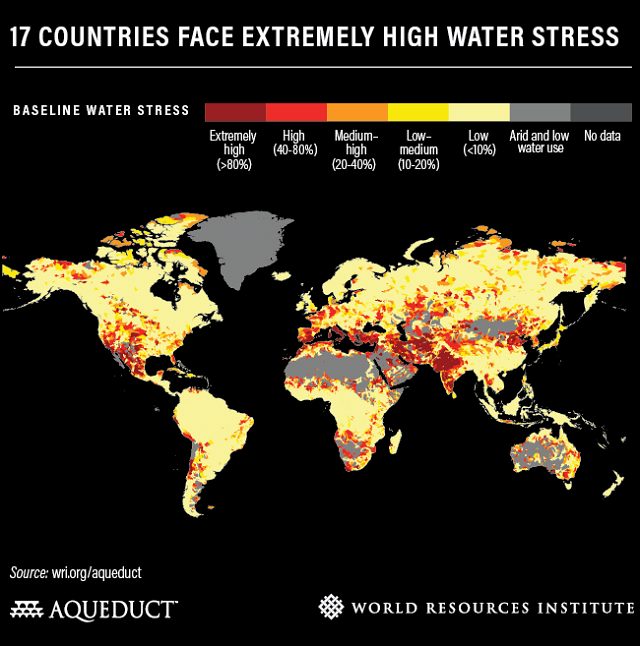 Why Rank Water Stress in Countries and States?

Water does not follow boundaries set by humans – rivers run across countries, and a flood may only affect a few city blocks. For this reason, most water-related information is collected at a watershed or sub-watershed scale. Yet the policy decisions required to reverse water stress – like setting withdrawal caps, encouraging wastewater treatment and establishing pricing schemes – primarily take place at an administrative scale, such as at a country, state or provincial level.

Data broken down by watershed is more useful to a scientist than a member of parliament. This presents a challenge for decision-makers keen to inform policy with the best available data on water risks. To aid with this process, WRI produces national and sub-national estimates of water stress, drought and flood risks that can help decision-makers better understand exposure to water challenges.

We’re already witnessing some of these impacts play out around the world. Here are four trends we’re seeing in the data:

Twelve out of the 17 most water-stressed countries are in the Middle East and North Africa (MENA). The region is hot and dry, so water supply is low to begin with, but growing demands have pushed countries further into extreme stress. Climate change is set to complicate matters further: The World Bank found that this region has the greatest expected economic losses from climate-related water scarcity, estimated at 6-14% of GDP by 2050. 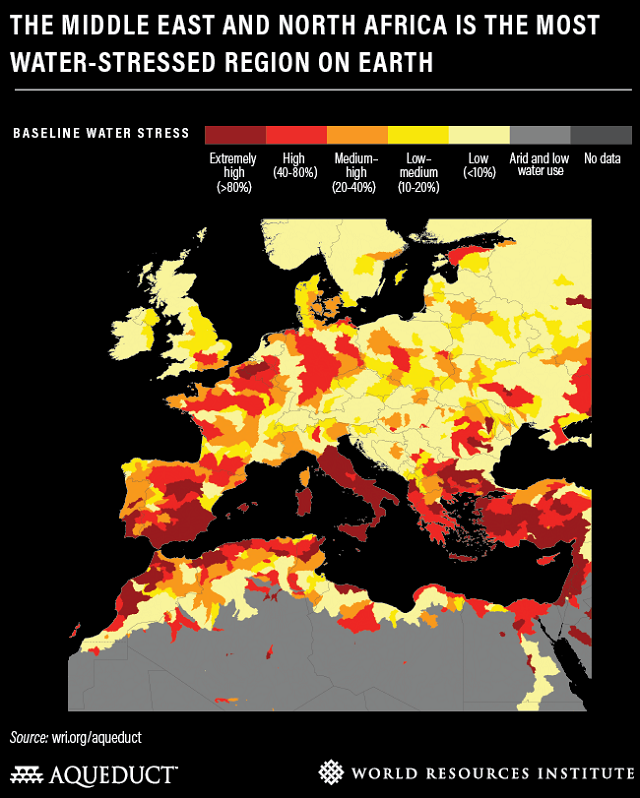 Yet there are untapped opportunities to boost water security in MENA. About 82% of the region’s wastewater is not reused; harnessing this resource would generate a new source of clean water. Leaders in treatment and reuse are already emerging: Oman, ranked #16 on our list of water-stressed countries, treats 100% of its collected wastewater and reuses 78% of it. About 84% of all wastewater collected in Gulf Cooperation Council countries (Bahrain, Kuwait, Oman, Qatar, Saudi Arabia and the United Arab Emirates) is treated to safe levels, but only 44% goes on to be reused.

India’s water challenges extend beyond current events in Chennai. Last year, the National Institution for Transforming India (NITI Aayog), a government research agency, declared that the country is “suffering from the worst water crisis in its history, and millions of lives and livelihoods are under threat.” Aqueduct’s findings put this crisis in context: India ranks 13th for overall water stress and has more than three times the population of the other 17 extremely highly stressed countries combined.

The new Aqueduct data includes both surface and groundwater stress for the first time. In addition to rivers, lakes and streams, India’s groundwater resources are severely overdrawn, largely to provide water for irrigation. Groundwater tables in some northern aquifers  declined at a rate of more than 8 centimeters per year from 1990-2014. 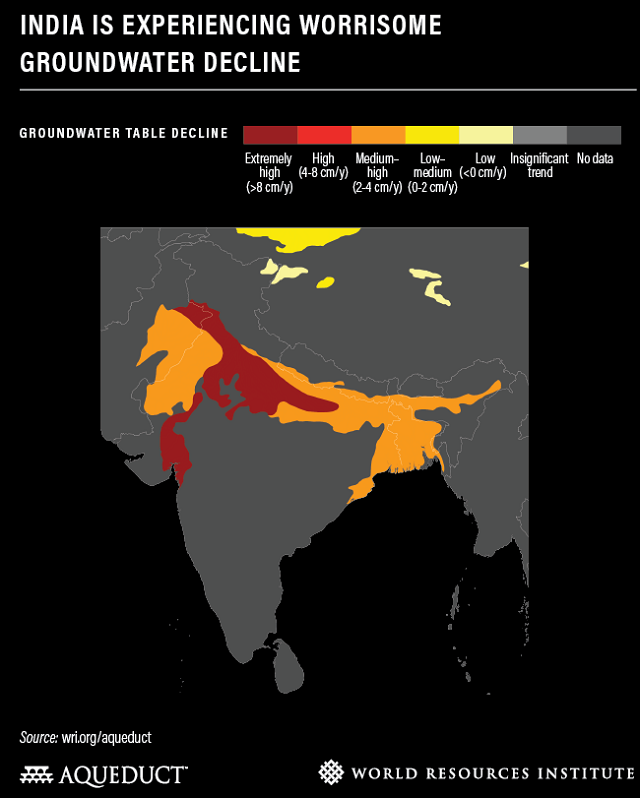 India is starting to take critical steps to mitigate water stress, including setting up the Jal Shakti Ministry to prioritize all water issues – including supply, drinking water and sanitation – under one national government umbrella. Other solutions the country could pursue include more efficient irrigation; conserving and restoring lakes, floodplains, and groundwater recharge areas; and collecting and storing rainwater.

While it’s helpful for policymakers to understand and take action on water stress at the national level, water is an inherently local issue. That’s why in addition to ranking countries’ water stress, Aqueduct includes data at the sub-national and sub-watershed levels.

It’s clear that even in countries with low overall water stress, communities may still be experiencing extremely stressed conditions. For example, South Africa and the United States rank #48 and #71 on WRI’s list, respectively, yet the Western Cape (the state home to Cape Town) and New Mexico experience extremely high stress levels. The populations in these two states rival those of entire nations on the list of most water-stressed countries. 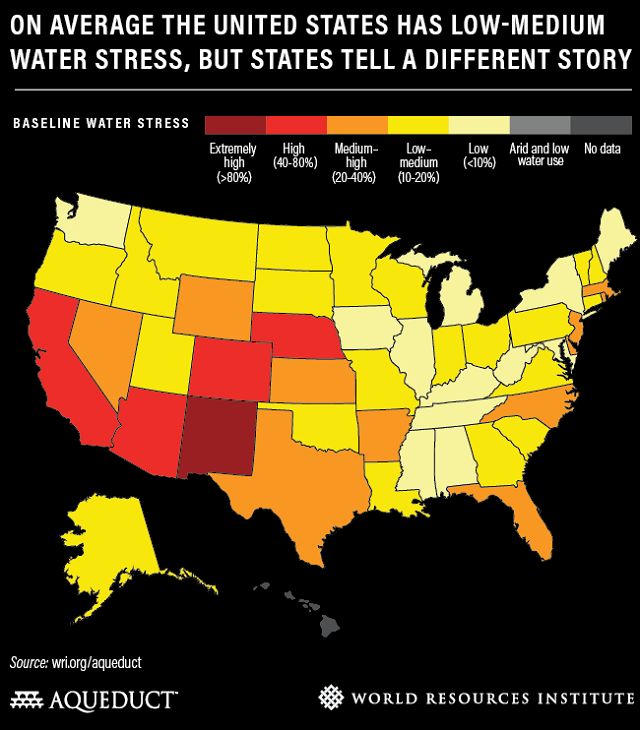 Water Stress Is Not Your Destiny

Water stress is just one dimension of water security. Like any challenge, its outlook depends on management. Even countries with relatively high water stress have effectively secured their water supplies through proper management.

Saudi Arabia, ranked #8 for water stress, prices water to incentivize conservation. Its new Qatrah (“droplet” in Arabic) program sets water conservation targets and aims to reduce water usage 43% within the next decade. Namibia, one of the most arid countries in the world, has been turning sewage water into drinking water for the past 50 years. And Australia nearly halved domestic water use to avert its own Day Zero moment during the Millennium Drought. The country’s water-trading scheme, the largest in the world, allows for smart allocation of water among users in the face of variable supplies.

In any geography, water stress can be reduced by measures ranging from common sense to cutting-edge. There are countless solutions, but here are three of the most straightforward:

The data is clear: There are undeniably worrying trends in water. But by taking action now and investing in better management, we can solve water issues for the good of people, economies and the planet.

Rutger Willem Hofste is an Associate for the Water Program at World Resources Institute.

Leah Schleifer is the Communications Specialist for the Water Program at World Resources Institute.