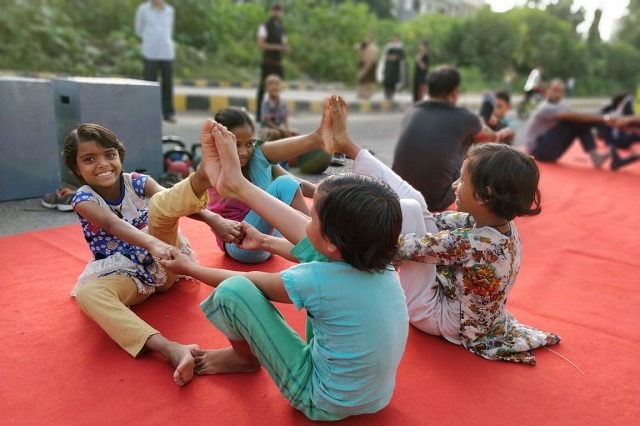 People of all ages participate in Raahgiri Day. Photo by WRI India

A couple of Sundays back, Haryana observed the first state-level Raahgiri in India. Chief Minister Manohar Lal Khattar personally came to the city of Hisar to participate in its official celebration with full state machinery. This was totally unthinkable when the Raahgiri started almost six years back in Gurugram.

On November 14, 2013, 4.5 kilometers of roads near Vyapar Kendra in Gurugram wore a different look. The roads were blocked for motor traffic and opened for people. Against cars, horns and chaos, there were people, laughter and smiles. Thus marked the birth of a phenomenon called the Raahgiri Day.

The first Raahgiri Day was created by a handful of Gurugram residents who came together to advocate for streets for all road users, not only for motorists. They wanted to show proof of the concept that the reason why people don’t walk and cycle in Indian cities (unless they are captive users) is safety and security. It had nothing to do with weather, psychology or any another reason. Therefore, if cities can provide safe and vibrant streets and spaces to people, then, irrespective of income, sex, age, etc., they would come out and use these streets and spaces. These residents were inspired by Ciclovía, a weekly open street event in Bogotá, Colombia, and the Raahgiri Day was born.

Today, the concept of Raahgiri Day has grown to over 70 locations in India. Some cities are using the Raahgiri name, while others have created their own brands. In fact, Raahgiri Day has also inspired many foreign cities. Addis Ababa, the capital of Ethiopia, is the latest city to join the Raahgiri Day bandwagon. The city learned from Raahgiri Day and started its own car-free day, Menged Le Sewe (“streets for people”), observed once a month.

Raahgiri Day has changed the face of citizen-led movements in our cities. There are multiple reasons behind it. Let me highlight a few.

Often, citizen-led movements are “owned” by one or a few co-founders. The result is that partnerships never move beyond the co-founding organizations. This really impacts the movement’s ability to scale up as the conversation revolves around who will get more credit. Raahgiri Day, on the other hand, is owned by everyone.

Public agencies, police, sponsors, citizens – everyone feels that Raahgiri belongs to them, and that is the fundamental reason behind such a huge uptake for Raahgiri. Yes, the co-founders have formalized themselves in the form of The Raahgiri Foundation, but they never claim their ownership. No one can associate any one organization or an individual as the face of Raahgiri. This is one of the main reasons behind its success and also a case study for other movements to follow.

Each Raahgiri Day event has three kind of partners. First is the organizers. These are public agencies, mostly municipal corporations and the police. The second set of partners is supporters. These are organizations that support the event either financially or technically and include private companies, media houses, NGOs and local volunteers. Last but definitely not least are the residents, schools, resident welfare associations and more who come and participate in the event. Each Raahgiri has a different set of these partnerships and yet it happens with the same zeal and enthusiasm.

Many times, popular movements are created to stall or stop something that is going wrong in our cities. Yes, they are needed. However, there is also a need to support the good happening in cities. This is where Raahgiri comes in. It is an apolitical, non-religious platform which is driven by the public, private and community participants for constructive change. Apart from successfully advocating for more inclusive streets, the Raahgiri Day platform has been used for launching and scaling up many other government initiatives. Beti Bachao, Beti Padhao; Swachh Bharat; and Accessible India are some of the national-level government development schemes that have used the Raahgiri platform to amplify their reach. The Raahgiri mornings are always about positivity and smiling faces.

So, Hisar’s state-level Raahgiri last week reminds us again how public, private and community participation can bring about positive change. And it is a demonstration of how a small experiment has the potential to become a national phenomenon.

The original version of this column appeared on Hindustan Times.