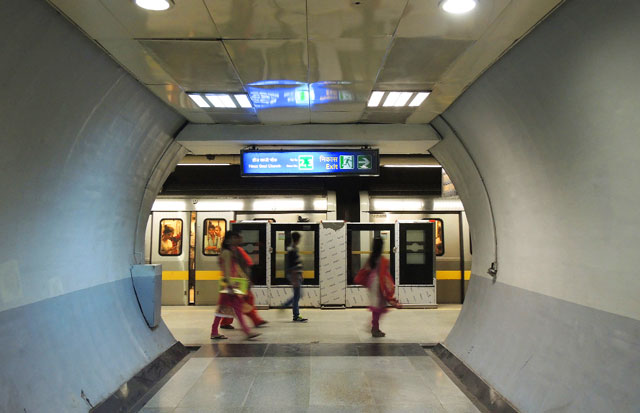 Women board the metro in Delhi, India. Photo by Axel Drainville/Flickr

On June 10, Arvind Kejriwal, the chief minister of Delhi, announced a new proposal to make public transport free for women. Once cleared, the move – which will cost approximately ₹700 crore ($100 million) to the Delhi government – will make traveling on all metro trains and buses absolutely free for all women.

Social media has been abuzz since the announcement was made on Monday. While some people are calling it a revolutionary move that will encourage many more women to use the public transport system, others are dismissing it outright. A lot of this reaction may be based on the recent national election results or the upcoming elections in Delhi.

To answer this question, we need to first understand the public transport system in Delhi. The Delhi Metro has around 340 kilometers of metro rail network. The city has around 5,500 buses, including those belonging to the Delhi Transport Corporation and Private Stage Carriage Buses Scheme commonly known as the Cluster Buses. In addition, there are around 200,000 paratransit vehicles, such as auto-rickshaws and cabs. There is also a huge number of people who walk and cycle.

The Question of Safety

The official rationale behind this move is that it will improve the safety of women by getting more women to use the system. This is correct but marginally so.

WRI India’s research on women’s safety in public transport found four distinct segments of the journey that impact the safety of women: access to stops, wait time, boarding and traveling. Delhi’s proposal does not fundamentally address any of the four segments. More women alone on the bus or train may improve safety in those situations, but not necessarily. We also need to understand that women do trip-chaining, which means they do multiple trips in one journey, some of which may be outside the public system. Also, they travel with dependents, such as children and parents. In addition, a lot of women do short journeys, on foot or via paratransit, that do not interact with the public transport system at all. Therefore, the proposal is unlikely to have a substantive impact on the safety and security of women in Delhi.

The Question of Mobility

The Delhi Metro was providing close to 2.7 million passenger rides per day before the fares were hiked in May 2017. Currently, the metro usage is around 2.3 million trips per day. It was reported that capacity will increase to around 4 million trips per day after completion of Phase 3, which has involved construction of an additional 167 kilometers of metro line.

While a couple of lines are yet to become fully operational, it can be seen that the metro is not optimally used currently, and it may have a lot to do with higher fares. A study by the Centre for Science and Environment found that Delhi’s metro is the second-most expensive system in the world. Therefore, fare rationalization will almost certainly get more riders into the system.

However, we still don’t have an accurate assessment of how many women use the metro, or would use it, if fares were eliminated. Studies show that the number may be around 30% of riders. Therefore, even if the number doubles, the metro would still be transporting 3 million despite a capacity of 4 million. On the other hand, 5,500 buses carry around 4 million passengers per day or around 800 passengers per bus per day. This means that the buses are crowded, and accommodating any additional demand will be very difficult unless the fleet is augmented.

The Question of Finances

It is estimated that the proposal might cost around ₹700-800 crore ($100-115 million) a year to the Delhi government. A lot of comments on local social media are around how much the proposal will cost tax payers. However, this is a slightly misguided conversation because we don’t charge the true cost for automobile usage and instead subsidize it at a high degree.

For example, a car can easily occupy 200-square-feet of prime residential real estate by paying around ₹100 ($1.40) per day. But an office or a shop will easily pay in excess of ₹2,000 ($28.80) per day for the same space. Similarly, roads, flyovers and other infrastructure are built for motor vehicle users without them paying the true cost. But we all expect public transport users to pay full cost. Why?

Hence, progressive cities around the world are now moving toward recovering the full cost of private transport usage through different fiscal instruments. If Delhi wants to subsidize public transport – and it should – it should take a lesson from other cities, not only generating revenue to pay for it from conventional sources like parking and vehicle registration, but looking at congestion charging and vehicle quota systems.

The original version of this blog was published on Hindustan Times.