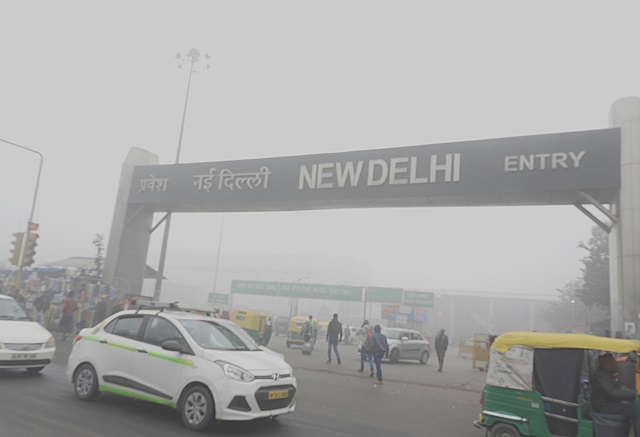 Visible air pollution in New Delhi, one of the most hazardous cities in the world in terms of air quality. Photo by Sumita Roy Dutta/Wikimedia Commons

Most of the rising global attention to air pollution focuses on the impacts that ozone, particulate matter and other pollutants have on human health. This is natural; the numbers in the headlines are striking. The World Health Organization (WHO) estimates that air pollution inside and outside the home is responsible for about 7 million premature deaths worldwide. The majority of these deaths ‒ 4.2 million ‒ are associated with ambient (outdoor) pollution. It is a leading environmental risk factor affecting urban and rural populations around the world.

Growing public awareness of the health consequences is encouraging, but we need to look at the bigger picture of what air pollution is doing to our planet and ourselves. The social costs of air pollution ‒ and the social benefits of reducing it ‒ extend far beyond health, including to climate, water, renewable energy and agriculture.

Breathing dirty air affects more than just lungs and causes more than premature death. Air pollution affects almost every organ in the body. A recent study by the Forum of International Respiratory Societies shows that air pollution contributes to everything from diabetes and dementia to fertility problems and childhood leukemia.

“Dirty air” can also be invisible. Inhaling soot or smoke with particulate matter ‒ often referred by size in micrometers, PM10, PM2.5 and PM1 ‒ blackens lungs and leads to respiratory and cardiac distress, and diseases such as asthma and cancer. Some PM10 is visible, but it takes a microscope to see PM2.5 and an electron microscope to spot “ultrafines.” The smaller the particle, the deeper in your lungs it can go, along with the chemicals it’s composed of. This kind of air pollution arises from incomplete combustion (of wood and plants as well as fossil fuel); dust; and combinations of other pollutants from various sources including agriculture.

Ozone, a gas formed by combinations of other pollutants from traffic, landfills, agriculture and other sources, is invisible. It contributed to 500,000 deaths worldwide in 2017, and as many as 23 million emergency room visits in 2015. Exposure to nitrogen dioxide (NO2), one of ozone’s precursors that largely comes from fossil fuel combustion, can cause respiratory and cardiovascular illnesses, as well as reproductive and developmental impacts.

Often called short-lived climate pollutants (SLCPs), black carbon (a component of PM), tropospheric ozone and methane contribute to both the warming of the climate as well as air pollution. According to the Climate and Clean Air Coalition, these three highly potent pollutants are responsible for 30-40% of the global warming to date. They must be curbed alongside carbon dioxide (CO2) to limit global temperature rise to 1.5 degrees C (2.7 degrees F) and prevent catastrophic climate impacts like sea level rise and water insecurity.

Black carbon and ozone persist in the atmosphere for just a few days and methane for up to few decades; it takes more than 100 years to eliminate CO2 . That means actions that reduce SLCPs can yield almost immediate reductions in their concentrations, with benefits to the climate and human health. Importantly, some particulate matter can also have a cooling effect by blocking solar radiation, but there will always be a health benefit from reducing particular matter. Decision-makers should consider this interplay when designing strategies to reduce SLCPs.

From rainfall patterns to monsoon intensities, air pollution can significantly affect the water cycle. Particulate matter can reduce the amount of solar radiation that reaches the earth’s surface, affecting the rate at which water evaporates and moves into the atmosphere. They also affect clouds’ formation and water-carrying capacity.

For example, changes in intensity and distribution of rainfall in India and China have been linked to particulate matter pollution. Some areas experience more rain than usual, often in concentrated bursts, while others experience less. Particulate matter also affects the trajectory and intensity of monsoons in Asia, and have intensified droughts in China, North America and South Asia. European and North American pollution affect rainfall and drought in the Sahel. To the casual observer, these impacts seem to blend in with more general environmental variability, but their impacts on agriculture, water reservoirs and biodiversity are significant.

Solar energy yields also drop in areas with significant particulate matter pollution. Wiping away dust on solar panels can solve part of the problem, but the rest is more complicated: Sunlight cannot fully penetrate through smog, reducing solar panels’ energy output. Studies in India and China find losses of up to 25% of potential yield in the most affected areas.

This can cut into solar manufacturers’ bottom lines and has major implications for cities and countries that want to promote a quick and cost-effective transition to renewables. Overall, pollution appears to cost China about 11 GW of power annually, for example.

Ozone can damage plant cells and negatively affect photosynthesis, while particulate matter can reduce the amount of sunlight that reaches plants and food crops. In 2000, global yield losses due to ozone amounted to 79-121 million tons, or $16-26 billion dollars’ worth in today’s prices. This included yield losses of up to 15% for soy and wheat, and 5% for maize. As ozone increases, losses do as well. This type of pollution has caused massive damage to food crops in India: From 2000-2010, the amount of wheat, rice and soy crops lost annually could have fed close to 94 million people. That’s almost the entire population of Germany. Similar findings in Mexico showed estimated yield losses of 3% for maize, 26% for oats, 14% for beans and 15% for sorghum.

Ozone and acid rain, which is created by sulfate and NO2 pollution (largely from fossil fuel burning), also affects other kinds of vegetation, forests and even pollination.

While its many and varied impacts may be daunting, we know how to reduce air pollution and significantly improve air quality. The benefits of reducing air pollution often far outweigh the costs, and air can improve much faster than most people realize if we put our minds and resources into it. These underrecognized but well documented costs only add to the tally of reasons we should act quickly and decisively to clean up the air.

We’re already seeing solutions we can all learn from. For example, experts say that by reducing SLCPs now, we could slow the increase in near-term global warming by as much as 0.6°C by 2050. Global assessments have outlined a clear agenda for achieving this target by expanding access to clean energy, improving transport fuels, reducing vehicle emissions and controlling methane leaks from fossil fuel production and agriculture, among other actions.

On a local level, we also have successes to learn from. Air pollution in Beijing has fallen considerably over the past 20 years thanks to improved energy efficiency and better controls on vehicle and coal emissions. A combination of investments in monitoring, political innovation and collaboration between regulatory and science communities in Mexico City helped diagnose the metropolitan area’s pollution and reduce it since the 1990s. The U.S. Clean Air Act is responsible for reducing ozone by 22% and PM 2.5 by 40% between 1990 and 2017, demonstrating that sustained efforts to tackle air pollution result in significantly cleaner air.

The question, then, is what’s stopping us? We can clean up the air, and we should all have a stake in it. Clean air is a resource that affects our health, our climate, our food security and more. We need to manage it well. Look for more on these topics soon.

Jessica Seddon is the Director of Integrated Urban Strategy at WRI Ross Center for Sustainable Cities.