Climate change affects poor and marginalized communities first and hardest. These effects are happening now – not in a far-fetched future.

Particularly in cities, a lack of access to basic services, a long history of unsustainable urban development, and political exclusion combine to render the urban poor one of the most vulnerable groups to extreme climate events such as flooding, landslides and drought. Yet strategies focused on reducing these people’s vulnerability to climate change often overlook crucial differences in their needs and situations. 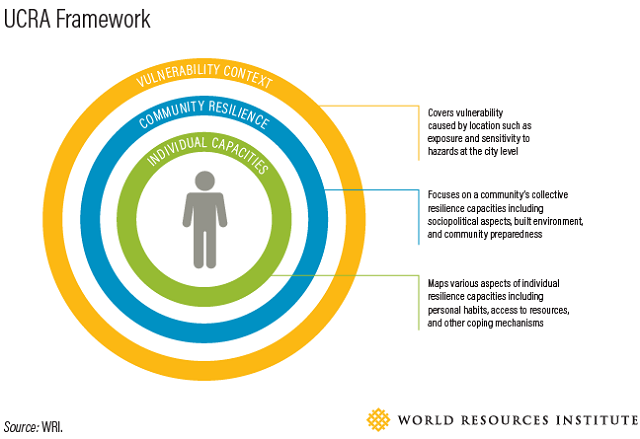 The UCRA assessment helps cities measure how urban poor communities and their inhabitants can best respond to potential climate risks. It also proposes participatory methods that can help cities identify resilience-building solutions based on local demand and knowledge.

After we collected 400 UCRA household surveys in each city, the results provided useful insights and guidance into how cities can better allocate and target resources to strengthen climate resilience in these communities. Three key findings arose:

1. Focus on Urban Planning and Services

UCRA considers ensuring sustainable development and providing access to quality urban services key pillars in strengthening the climate resilience of the urban poor. Our surveys highlighted the direct effect of this approach.

In Morro dos Macacos, for example, the assessment found that inadequate urban waste collection services caused waste dumps to pile up, block urban drainage systems and lead to more frequent floods during heavy rains. Residents revealed in workshops that a waste-picking scheme that previously employed community members had been suspended, despite its effectiveness in managing local waste.

2. Measure Social Networks by Strength, Not by Size

Research suggests that strong social cohesion in communities is a positive driving force for climate resilience. In UCRA’s community resilience survey, almost all communities displayed a strong sense of neighborhood attachment, with residents stating that they knew a lot of their neighbors by first name and had a strong sense of community identity. However, this did not translate into strong relationships between neighbors, since many didn’t talk over the phone or meet up regularly.

The residents of Morro da Formiga also indicated that the community didn’t engage with local governance or neighborhood associations – activities that are useful for organizing and leveraging important communication channels with municipal government to prepare and respond to extreme climate events. As a result, local governance and social cohesion were not being leveraged enough to help build more climate resilience.

Individual capacity to deal with climate change in urban poor communities tends to be low, even in communities where city governments have invested in climate resilience infrastructure. In Morro dos Macacos, where Early Warning Systems against heavy rains were installed in 2011, few residents had registered for the mobile phone alert system (which sends out an SMS in case of a call for evacuation) or participated in resilience training courses offered by the city’s Civil Defense.

This suggests that improved urban development or infrastructure services need to be implemented in combination with training and awareness-raising efforts on the ground, in close proximity with the communities. This will help residents to develop new habits and behaviors that increase their resilience to climate change.

The development of UCRA is part of a wider project, funded by Cities Alliance, that sets out to support urban designers and city officials engaged in climate change and urban planning. Since the initial application in Brazil, UCRA has also been deployed in vulnerable urban communities in Surat, India and Semarang, Indonesia. Results from these cities will be published later this year.

Katerina Elias-Trostmann is a former Adaptation Specialist at WRI Brasil. She currently works for the UK International Climate Finance as the Forests and Land Use Manager.

Lauretta Burke is a Senior Associate at World Resources Institute.