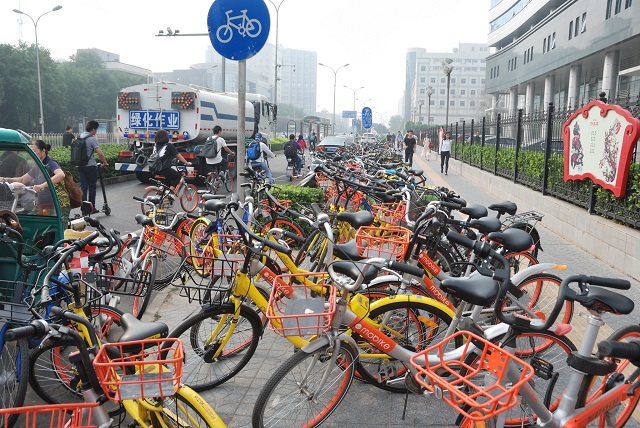 Shared bikes are now common on city streets, sidewalks and public spaces around the world. As of May 2018, there were more than 1,600 bike-sharing programs in more than 1,200 cities, amounting to more than 18 million shared bicycles. The emergence of bike sharing on such a large scale brings enormous potential benefits to cities, such as improving first- and last-mile connections to public transit hubs, reducing traffic congestion, and offering more transit options to residents of all income levels.

However, despite the widespread adoption and proliferation of shared bikes, they aren’t without criticism.

There are two primary models of bike-sharing systems in operation: docked and dockless. Traditional docked systems are sometimes inflexible. As demand increases, it can be difficult to move bikes around the system to balance both the need for empty docking stations at popular receiving locations and the need for bikes at popular starting locations.

Dockless systems are less limited by fixed station infrastructure, and they allow companies or cities to grow coverage very quickly. However, dockless systems still need to be load balanced and they have faced backlash because of vandalism and unregulated use of public space, like sidewalks. Many cities are now increasing regulations on dockless operators in response.

New technologies are coming on the scene that could fill in the gaps between both models, allowing for better user accessibility and providing more organized yet flexible parking solutions for cities. In China, where dockless bike-sharing first took off, two cities are taking the lead on finding a middle ground.

Though merely the fifth-largest city in China with a population of 9.8 million, Hangzhou has the largest docked bike fleet in the world, comprised of 86,000 bikes and accounting for 473,000 daily rides. Driven by extensive use encouraged by advertisement, an easy ticketing system and exporting consulting services to other cities, Hangzhou’s publicly owned bike system even turns a profit.

But due to high ridership, popular docking stations fill quickly, leaving many riders unable to return their bikes. In March 2018, the city introduced smart lock technology, allowing users to park bikes in dedicated areas next to docks when they are full. Bluetooth geofencing devices were installed in dedicated parking areas and shown on mobile apps. 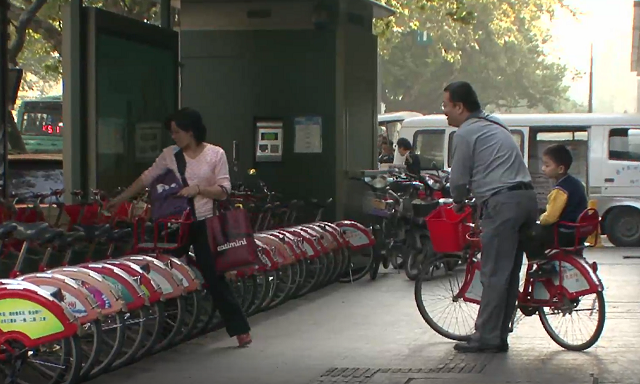 The docked bike system in Hangzhou allows riders to park in geofenced areas even when docks are full. Photo by Streetfilms/Vimeo

A pilot began with three sites and 50 upgraded bikes. With the support of the city government, the system expanded to 1,000 sites and 10,000 bikes by the end of 2018. The pilot ended up saving the operator money by adding capacity to existing docks and limiting bike redistribution. Since bikes can now be parked near full docks, operators don’t need to spend as much time and money shuffling bikes around to free up space.

This model has been replicated in other cities with publicly owned docked systems. Nlanjing, Xi’an, Suzhou and others are following this practice, enabling residents to have better access to the systems, while adding flexibility on the operator side as well.

Not far from Hangzhou, Shanghai is also using geofencing in innovative ways to help get a handle on the many private companies operating the nearly 1.5 million dockless bikes on its streets (as of 2017). 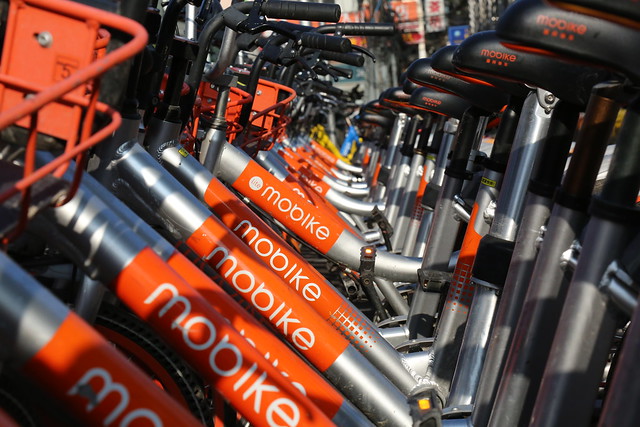 In June 2018, Mobike (now known as Meituan Bike) worked with the city government and traffic police to monitor and regulate bike parking with virtual mapping and geofencing. Mobike’s app now indicates where riders can and cannot park their bikes. Any parking in the prohibited areas triggers an alarm, and users receive text messages about the location and time of their violation. 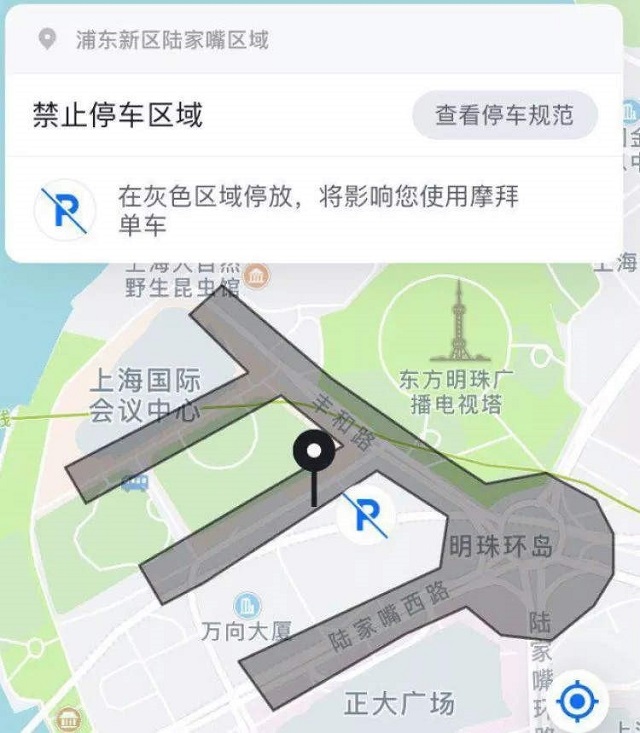 The Mobike mobile application displays where dockless bikes are not allowed to park in Shanghai. Image capture by WRI China.

A pilot project banning dockless bikes from parking in seven locations in downtown areas resulted in a 30% decrease in illegal parking within two months, making street space more functional for all users. Mobike then added more prohibited parking locations and introduced stringent parking rules for users. For repeated violations, users face a small fine and run the risk of not being able to use the service altogether.

By the end of 2018, the city government had worked with additional bike-share companies to create more than 70 prohibited parking areas by installing e-fences within the Inner Ring Road. Moreover, to allow better government oversight for dockless shared bikes, more than 890,000 dockless bikes (over 60% of the total shared bikes in the city) have been registered with traffic police system.

Although many other Chinese cities, such as Beijing, Shenzhen and Guangzhou, have adopted geofence technologies for parking management, Shanghai’s experience stands out as one of the first large-scale operations that integrates technology with better cooperation with law enforcement.

These advancements demonstrate how local regulations and innovative use of technology can come together to benefit commuters and cities. With dockless companies on track to meet 1 trillion rides annually worldwide, and docked bikeshare systems expanding their reach too, cities have the opportunity to improve local bike-share systems and the culture around them.

By formulating holistic regulations, improving facilities to allow more inclusive services, and holding operators and enforcement accountable, bike sharing can become an even more accessible and effective mode of travel.

Hui Jiang is a Research Analyst for New Mobility and Road Safety at WRI China Ross Center for Sustainable Cities.