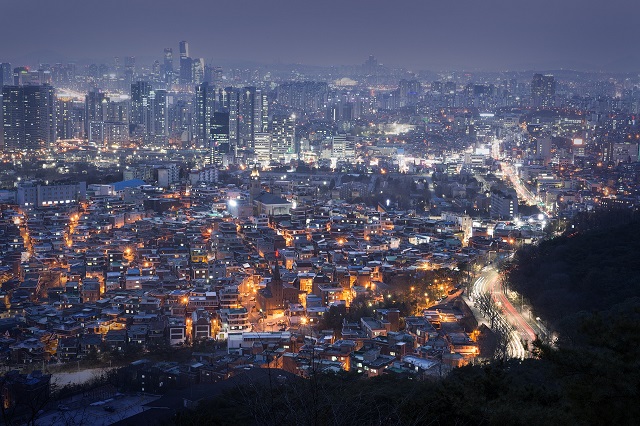 Seoul, South Korea, has the largest carbon footprint of any city in the world.

A map of the study’s main results looks like it could be showing night-time lights, but the carbon footprint of cities calculations account for more than just electricity consumed in each city. It is also surprising to note that Africa and South America, which show up clearly in nighttime-lights maps, are dim compared to North America, Europe and East Asia in terms of carbon footprints.

The study, led by Daniel Moran, environmental economist at the Norwegian University of Science and Technology, considers both emissions which occur within the city boundaries (from powerplants, vehicles and buildings), and those embedded in the products consumed by residents but produced outside of the city boundaries. For example, city dwellers typically eat more meat and dairy (which have a high carbon footprint) than in suburban and rural areas, but city dwellers may be less likely to own a vehicle. In most cities the carbon footprint of the stuff consumed by residents are two to three times larger than the emissions occurring directly within the city itself. Seoul has a large footprint because it is very large, and the city has a high demand for imported food, meat, and other high-footprint goods, and services, as well as substantial direct emissions from transport and building heating and cooling.

When you think of the world’s top emitter in terms of carbon emissions, you might think of Beijing or maybe New Delhi. According to this research Seoul, the capital of South Korea, is the city with the largest carbon footprint, followed by Guangzhou in China and New York City in the United States.

This study also confirms the finding that carbon footprints are highly concentrated by income. The global top 10 percent of earners, those earning more than about $14,000 per year, drive about a third of global emissions. This means that concerted action in a few big and rich cities can go a long way to reduce global emissions.

Local Action Can Have a Huge Impact

Carbon footprints are quite concentrated in large cities, which means local governments in these regions can have a big effect on reducing emissions in their home country. In many countries, just three urban areas drive more than one-quarter of national emissions. While national governments are slow to make commitments to reduce carbon emissions, cities and states can have a huge impact if they step up and take action.

Much of our carbon footprints are fixed by the society we live in and decisions made by city officials: the transit options city planners create, the building energy efficiency standards that states and counties define, the renewable energy requirements that states set, and similar institutional decisions. On average, 20% of the carbon footprint arises from government purchases. Cities can take strong steps such as requiring green electricity, adopting tough building energy requirements, banning non-recyclable cups and bags, and adopting green procurement practices.

What Defines a City?

Getting good estimates for carbon footprints of 13,000 cities wasn’t easy. The authors faced several challenges and the study has some limitations. Emissions data are just for 2013 – the most recent data year available. Defining city boundaries might be thought of as simple, but it can be difficult. In this study the authors defined a city the way a satellite sees it: a contiguous cluster adjacent of populated grid cells. But these boundaries, and the lack of proper place names, mean the results do not correspond to jurisdictional boundaries. Addressing this will help inform decision-making at local city, state and county governments.

The new data has been made open source and is displayed on Resource Watch.

This blog was originally published on Resource Watch.

Emily Cassidy is a Data Journalist for the World Resources Institute, where she works to expand visibility and impact of WRI’s research and the Resource Watch platform.

Daniel Moran is an environmental economist at the Norwegian University of Science and Technology.