Sunday afternoon along the tramway along Istanbul's Istiklal Caddesi. Photo by E&G PhotoPage.

In Istanbul, waterways ruled strong over the seat of empires. The former Constantinople’s claim to fame came from its geography nestled among the world’s most strategic waterways. Once on land, merchants and other city dwellers would generally utilize human and horse power through narrow streets. Then, automobiles became the city’s main method for movement. As the city grew and its population became more motorized, Istanbul rapidly transitioned from sleepy seat of empires past to modern era of transport terror, where people often commute for up to 4 hours a day and gridlock swallows the city whole. Though, one area decided to restore peace and prosperity: Istiklal Caddesi, a major artery through the heart of modern Istanbul.

The pedestrian zone of Istiklal Caddesi, is not only on every tourist’s to-do list, but also a important hub for Istanbul commerce, culture, and history. This street, built mainly in the 1800s, became dirty, dangerous, and overrun with cars throughout the past decades. The city decided to reinstate the old trolley car lines and make the street a pedestrian zone. Istiklal is now the center of life in Istanbul with up to 3 million visitors a day. Public transport strategically placed on both ends of the street provides access to businesses, nightlife, and cultural. Meanwhile, taxis and private mini-buses provide other access points.

The street is so crowded at any given day of the week or time of day that one could scarcely imagine where a car could even fit. Istiklal Caddesi offers peace in its tucked-away cafes and narrow passages filled with flowers, sweets, and other treasures. Although the path to pedestrianization was not easy.

Shopkeepers protested that denying cars access would ultimately hurt their businesses. Still the city proceeded. Business revenues most certainly increased. Although more research needs to be conducted to provide data on how much business might have increased, the differences are clear. Pedestrian zones have more room for people, so logically more people come and ideally, shop, eat, or otherwise spend money.

Overall, Istiklal Caddesi raises an interesting point in Istanbul. For whom and where a place is pedestrianized matters. Pedestrian zones might not be appropriate for all business districts, but in certain places they do reinforce local commerce and bring life back to the streets. Which businesses sit on the pedestrian zone are a major determining factor. Istiklal Caddesi’s main businesses are cafes, restaurants, shops of clothes, books, and music, making it ideal for strolling pedestrians to browse.

The nearby neighborhood of Şişhane is the central business area for lighting stores and heavier home goods, which are usually transported in cars. A pedestrian zone would obviously not succeed in Şişhane because the businesses rely on automobiles, however on Istiklal most businesses don’t need cars. Thus, business zoning is an important factor when pedestrianizing street and convincing local business owners.

Could Eastern Market learn from Istanbul's example? Photo by ngolebiewski.

To briefly test the idea, I did a brief walk through Eastern Market in Washington, D.C. Eastern Market is generally closed to traffic on weekends as it plays host to an open air market, although, in past years it also had some days open to traffic as the area was under construction. When asked if business increases when cars are forbidden, shopkeepers clearly responded, “It depends on who you ask.” The majority of businesses that focus on food, clothes, art, and book all seemed to increase. Two other business with heavier items such as carpets or larger frames for paintings, revenues decreased. Overall, convincing local business on the benefits of pedestrian zones largely depends on who they are and what they sell. In short, selling pedestrian zones to business owners is not impossible, as Istiklal proves, but one does have to bring a better business sense when pitching the pillars of sustainable transport and cities for people. 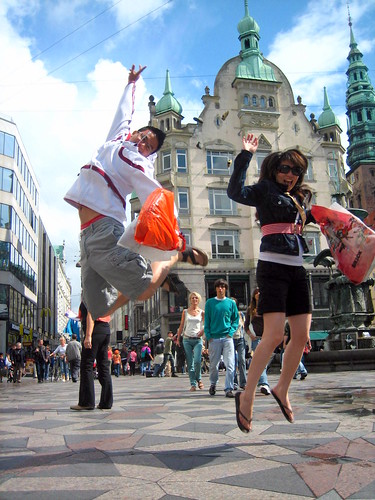 Aside from concerns from business owners, locals retorted that cars were a question of culture and pedestrian zones were simply “un-Danish.” Critics argued that strolling along a pedestrian zone was suitable for Mediterranean countries where people had a more relaxed culture, but this was not for Denmark. Danes, in their opinion, were a practical people who eat at home rather than spend time in cafes, and shop by car to maximize efficiency.

Despite the identity crisis, the street was turned into a pedestrian zone in the 1960s. Much to the surprise of nay-sayers, sales increased on the street. Even more interesting, it turns out that human cultures trump “Danish” culture. The street easily filled with people as most enjoy an outdoor stroll. Sitting in cafes with friends is preferable to sitting in a car alone. Fresh air, exercise, and social scenes are desirable even though chilly Copenhagen days. Over culture and climate, pedestrian zones attract people of all nationalities.

The Strøget scene has powerful implications for a pedestrianized Georgetown as well. Although most businesses in Georgetown would most likely prosper from pedestrianization, the question of culture is the conundrum. Perhaps there is no country more attached to the automobile than the one that gave birth to them: the U.S. Or could America redefine itself away from the confines of cars, and instead rebuild on people and communities?

Georgetown would certainly be one of the cornerstone examples of live-able cities, if only it desired. The businesses around Georgetown seem to be ones that would benefit from more pedestrians. Sidewalks and congestion currently deter people from visiting the beautiful, historic area. Metro access requires a bit of a hike and buses inch along in the congestion. Almost any improvement seems welcome.

The long-term vision for Georgetown is quite simple, but convincing business and changing cultures takes some finesse. The neighborhood could easily be served by a Bus Rapid Transit line on M Street, linking it up to other parts of DC and Virginia. Of the current four lanes of moving traffic, a BRT would only take up two, leaving plenty of space for pedestrians and bike lanes. Wisconsin Ave. would also be another prime target for improved public transport and more infrastructure for bikes and pedestrians, as it also cramps cars and confines terrorized pedestrians to a mere 3-4 feet of sidewalk space. The corridors along the waterfront could almost seamlessly incorporate more trails and bike lanes (although there are already some through the parks) and then link into the commercial area.

Georgetown is an example that cultural areas don’t have to be congested with cars. Narrow historic streets need not accommodate vehicles for which they were not designed. They can, in fact, return to their noble, original purposes: to serve people. As other cities and history demonstrate, the difficulty lies not so much in the design or vision, but rather in guiding shifting cultures and the powers of persuasion, something that Washington D.C. might understand.