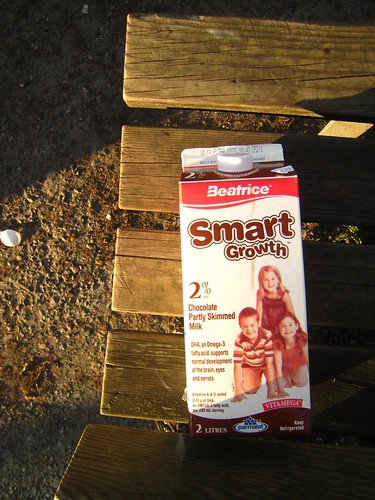 It’s always good to have your argument laid out for you in a well-designed policy paper. The Center for Clean Air Policy’s new report, “Cost-Effective GHG Reductions through Smart Growth and Improved Transportation Choices,” does just that. It lays out in a concise manner why creating a sustainable transportation system built on smart growth is necessary, why it is possible and why it is cost-efficient. Summary below the fold:

It also has an interesting and incredibly important section arguing that cap-and-trade will be less effective in reducing transportation emissions as compared to other sectors, noting that VMT has historically been very unresponsive to changes in fuel prices. CCAP calculates that a $50/ton allowance for CO2 would only reduce VMT by 4%. The Energy Information Administration calculated for Lieberman-Warner that a $100 per ton allowance would have only reduced VMT by 3%, so the number might even be lower. If these numbers are accurate, that’s an important point. I will say, though, that I was a bit skeptical of this section, as it claimed that one of the reasons VMT is inelastic is that because there are multiple actors, “no single party is in a position to make comprehensive changes in response to a price signal.” As the inability to centrally plan all of this is the very argument for using pricing schemes in the first place, this isn’t a very logical claim. So an important section, but one that should be taken with a grain of salt.

The report next offers a pretty striking rebuke to the technophiles who feel that efficiency will save us. The report notes that if by 2030 the car fleet meets a CAFE stand of 55 mpg and we have reduced GHG emissions per unit of fuel by 15%, that would only reduce GHG emissions from passenger vehicles by 14% from 1990 levels, whereas to meet 2050 goals, passenger vehicle emissions would need to be between 20 and 47% below 1990 levels. Even in a context of massive technological progress, reducing VMT remains a necessary goal.

The report ends by showing through a number of case studies that it is possible and cost-effective to reduce VMT. Portland, for example, reduced VMT by 8-10% from 1990-2007 (a period when national VMT increased by 8%) even as the region’s population increased by 14%. Arlington, VA has had a 20-30% VMT per capita reduction between 1980 and 2005. Two comprehensive plans for the Sacramento area came out with the smart growth option reducing CO2 emissions by 14% while saving $1.4b (net present value) in fuel costs, transit costs, and infrastructure costs. The details and math on these and others are all in the report.

The punchline of the whole thing is that they calculate that a 10% reduction in VMT would eliminate the carbon equivalent of 30 million cars on the road or 35 large coal power plants without taking into account the GHG emissions benefits of reducing congestion and building energy costs. So if you want a go-to pdf on why it’s absolutely necessary to reduce driving to reduce emissions, this is a good one.