Generally, I’m not such a fan of the L’Enfant plan for D.C. I’m from Boston originally, and always feel more at home on illogically winding streets than rationalist straight lines. I think that the L’Enfant plan also makes it easier for D.C. to be so single-use; so many of the streets just scream out that they are or aren’t for commerce.

But sometimes you’re walking in this city and you realize just how effective the L’Enfant plan for the city really is. I walked this route after work yesterday:

As a result, I got the full down-the-avenue view of the Capitol on North Capitol, New Jersey, and Pennsylvania. Each time, it was physically arresting; you just had to stop and admire it. 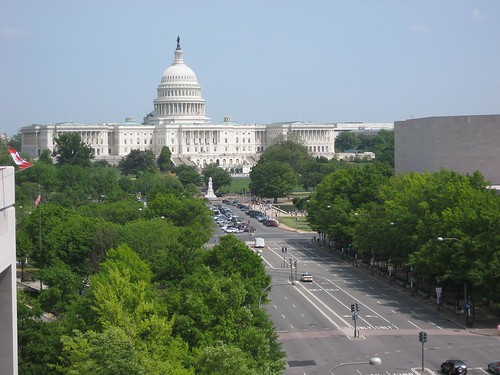 It really does make you more patriotic as you walk around. I guess there’s a reason that the boulevard terminating in a landmark is a hallmark of city planning from the Romans through L’Enfant, Haussmann, Burnham, and then at a smaller scale Jane Jacobs, Kevin Lynch and the New Urbanists (as Andy Taylor discusses in today’s installment of his fun and valuable “Year with Jane Jacobs” project).

Of course, it’s a real pity that I-395 runs right through there. There’s a road where it’s impossible to decide whether it’s more of a disaster aesthetically or functionally.