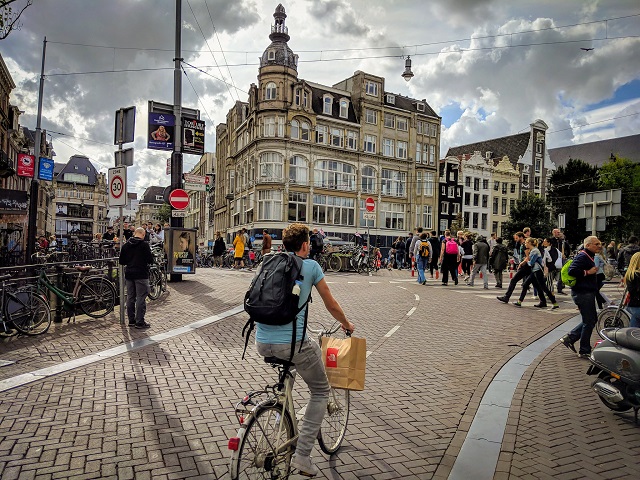 The Dutch model for strengthening cycling culture emphasizes a holistic approach, with infrastructure, public engagement and multi-stakeholder collaboration all key to prioritize. Photo by Nick Busse/Flickr

For many, the first thought that comes to mind about the Netherlands is crowded bicycle racks and bike-savvy commuters. The country has set the global standard for good practices in bike policy, infrastructure and engagement to make cycling a safe and preferred mode of transport.

In contrast, Turkey has experienced a number of economic, social and physical barriers to establishing a durable bike-friendly culture in cities. To draw inspiration from the Dutch model and promote cycling in Turkey, WRI Turkey Sustainable Cities has partnered with the Dutch Cycling Embassy to “Get Turkey Cycling.” Funded by the European Union, the project is operating in three pilot cities – İzmir, Eskişehir and Lüleburgaz – in collaboration with city administrations and local organizations.

In July, representatives from the pilot cities and Turkey’s central government participated in a two-day study in Amsterdam, during which Dutch experts shared their experience in developing a robust cycling culture.

The Turkey team came away from Amsterdam with three key lessons to enhance cycling in Turkey and elsewhere:

1. Plan Your Approach Based On Your City’s “Cycling Category”

There is no one-size-fits-all model for making cities bike-friendly. Each city must develop a cycling policy based on the local context, including existing infrastructure, transport habits and needs. To help cities plan the best path forward, the Europe-based PRESTO cycling project has identified three categories of cities based on cycling conditions and culture: starter, climber and champion cities.

In a starter city, less than 5% of trips are taken by bike, and road design is still car-oriented with little to no cycling infrastructure. To demonstrate cycling as a viable mode of transport, municipal leaders in these cities should first consider neighborhood-level cycling projects. For example, Zagreb, Croatia, built up its cycling network by starting in the city center, but now has over 200 kilometers of cycling lanes.

Biking in climber cities accounts for between 5% and 20% of total trips, and cycling infrastructure is safer and more convenient, with cyclists more visible both on the roads and in policy. But ridership still has room to grow, and existing cycling infrastructure can be improved and more integrated into the larger transit system. Venice, Italy, for example, is trying to increase ridership by developing bike challenges, like bike-to-school and bike-to-work events, to encourage more people to give cycling a try.

Even in champion cities, where cycling accounts for more than 20% of trips and there’s a comprehensive cycling network, the challenge isn’t over. A city at this stage usually focuses on promotional work to solidify cycling as part of its identity. In Bremen, Germany, local PRESTO activities have focused on publicity campaigns for events, like bicycle festivals and electric bike demonstrations, as well as for better parking infrastructure.

Amsterdam uses a “customer journey pyramid” to understand how residents think about cycling. First, people have to feel safe enough to get on a bike in the city. Motivations can be improved with better safety infrastructure: traffic lights, signs, bike lanes, direct routes and more. Second, riders need to feel confident in their physical skill level. This is up to the discretion of the individual and is dependent on how they view cycling in their city. Third, they need to be sure they can safely park their bike at the end of their journey. Finally, they need to feel that cycling will be comfortable and relatively stress-free, which better safety infrastructure and bike paths can also help with.

Strong national cycling policies help guide local and regional authorities to develop their own policies and establish new frameworks to implement robust cycling programs. In the 1970s and 80s, strong involvement and funding from the national government allowed Dutch cities to improve infrastructure, build safe routes​, solidify cycling master plans and shift transport away from private vehicles. In the 1990s, cycling policy decentralized to provinces and municipalities, though the national government remained a valuable partner.

But challenges remain, even in such a bike-friendly country. As the number of cyclists increases, new sets of problems have arisen such as the inclusion of elderly people, bike parking and bike theft. A national initiative called Tour de Force, launched in 2015, has brought strong national involvement back into local Dutch cycling policy to help address these concerns and create a multimodal society that serves everyone. The initiative convened representatives from all levels of government and NGOs, working to improve cycling infrastructure and regional routes, reduce accidents, address bike theft, increase ridership with more targeted promotion, and highlight cycling as an environmentally friendly mode of transport.

Dutch experts emphasized that when a city decides to advance its cycling culture, it’s vital to keep in mind all the different dimensions of the process. It’s never only about building infrastructure; it’s also about communicating the benefits of cycling, educating riders and residents about best practices, embedding cycling into the city’s DNA, and ensuring that all stakeholders work together to create a cycling network tailored to the city’s unique context.

To get more bikers on the road and tap into the many economic, social, health and environmental benefits of cycling, Turkish “starter cities” must demonstrate that biking can serve as a viable commuting mode. Then, using the Netherlands as a model, city administrators, civil society and government ministers should work together in a targeted way to continue encouraging a culture of safe, reliable, stress-free rides.