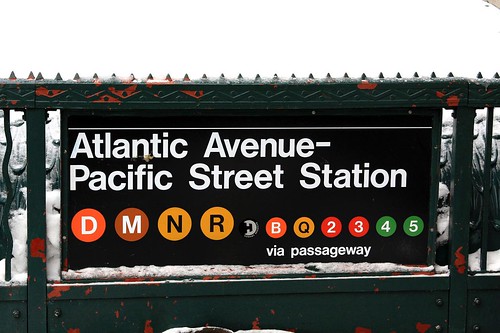 The news is a few days old, but I think it’s really fascinating that New York is considering selling partial naming rights to the Atlantic/Pacific station, the second busiest station in Brooklyn. The Times article on the sale gives some very useful context to the sale. The MTA has been trying to sell naming rights for around five years, including at the new Mets stadium, where Citibank paid for the stadium naming rights, but not the nearby station (now named Mets/Willet Point). Boston tried to sell four station names but didn’t get any bids, while Tampa and Las Vegas have both successfully sold the naming rights to entire lines. As a trend, selling naming rights is happening, but slowly.

In some ways, I’m surprised that this hasn’t already happened; there are advertisements just about everywhere in every subway system I can think of. No one would argue that these public objects are a purely public space that cannot be sullied by advertisements.

Even so, people are very upset about the idea of selling those naming rights. Second Avenue Sagas asks “What is stopping Disney from buying the naming rights to Times Square? Who wants to get off at 42nd St./Times Square/Disney? What about 59th St./Bloomingdales?”

The Village Voice‘s Runnin’ Scared blog opens its post with “That resounding “Ewwwww!” you heard emanating from Brooklyn was the sound of locals discovering that as part of Bruce Ratner’s revamped deal with the MTA for the Atlantic Yards site, he’s set to get naming rights to the Atlantic Avenue subway station.”

Maybe my favorite response is this commenter on Gothamist, who lists his or her proposed new station names, including such gems as:

“Prospect Ave. Nick Is For Kids

42 St. Port Authority Bus Terminal Hanes Wait ‘Til We Get Our Hanes On You

Christopher St. Focus On The Family

In other words, this isn’t popular. Why are people so much more upset by this than by plastering the stations in advertisements in the first place?

It’s a reminder of the importance that public space still has and the absolutely critical role that our subway systems have in creating our social geography. Kevin Lynch, in his masterful The Image of the City, asked residents of a number of cities to draw a map of their city. What they drew revealed so much of how they experienced the city: what was included and what was omitted or what locations were placed together and which were separated, for example. I am sure that if Lynch were to repeat his experiment today in any city with a comprehensive subway system-and that includes both New York and D.C.-the maps he would get would look a lot like the official subway maps. They wouldn’t look at all like these maps of the subway systems at real geographic scale.

When we say where we are going, even if we aren’t going by Metro, it is so often defined by the overlay of the Metro map. In D.C., I don’t know anyone who says that they are going downtown. That used to be a term you’d hear more often, but now you are going to Metro Center or near Judiciary Square. I have a few friends who are spending the summer in a neighborhood they call Fort Totten, because that’s the nearest Metro station, although I’m pretty sure they “technically” live in Petworth.

When seen from this perspective, the problem isn’t that selling naming rights opens commuters up to a barrage of new advertising. That ship has already sailed. The problem is that it takes away the public’s right to define its communities. We identify with our neighborhoods and the bounds of those neighborhoods are significantly (though far, far from exclusively) shaped by the subway map. To sell the naming rights is to give away our ability to build geographically based communities free from corporate influence. It is to say that the names do more than identify where we get off the subway; they shape how we see the place we get off into. The public should retain that right. Our transit authorities are strapped for cash. They should be funded better and in the meantime should be finding creative ways to sell advertising space (I love those animations out the window of the subway). But they shouldn’t sell off the names of the stations.