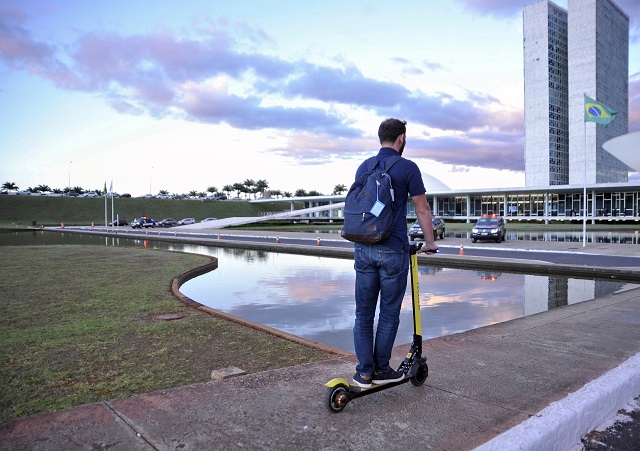 Market disruptions like shared electric scooters can be great for cities, getting people out of their private cars and enhancing connectivity and accessibility. But while e-scooters offer a practical and more sustainable new form of transportation, they also bring concerns for local authorities, primarily in regard to safety and use of public space.

In less than two years, shared e-scooters have become commonplace in many cities around the world – including in more than a dozen Brazilian cities, where a handful of companies share the market. Using our global database on new mobility regulations, WRI Brasil Ross Center conducted an analysis of scooter regulations in seven Brazilian cities – Florianópolis, Recife, Rio de Janeiro, São José dos Campos, São Paulo, Vitória and Fortaleza. The analysis examined where the cities’ e-scooter regulations align and where they differ on five key metrics.

Where to Ride and Speed Limits

In 2013, before the inception of e-scooters, Brazil’s National Council of Transportation (CONTRAN) stipulated that “self-propelled individual mobility equipment” could not surpass 6 km/h (3.75 mph) on sidewalks and 20 km/h (12.5 mph) in bike lanes and paths.

While CONTRAN’s six-year-old rule doesn’t account for the advent of shared e-scooters, many cities still abide by it today. In five of the seven cities studied, e-scooter use is legally restricted to sidewalks, bike lanes and paths.

But in recent months, São Paulo and Rio de Janeiro began allowing e-scooters on slower roads with speeds up to 40 km/h (25 mph) and prohibiting them on sidewalks. São Paulo also enacted further speed-control measures, requiring users to stay under 15 km/h (8 mph) for their first 10 rides. To comply, e-scooter companies are to install safety devices on all vehicles to guarantee riders don’t surpass these speed limits.

In May 2019, São Paulo required the use of helmets on e-scooters and mandated that scooter companies provide the equipment. But since cyclists aren’t even required to wear helmets, this angered much of the community. By August, following months of complaints, the city reversed its stance.

In Rio de Janeiro, city regulation recommends the use of helmets but does not stipulate any penalty for users or companies for not wearing or requiring them. Other cities have not included specifics on helmets in their regulations.

All seven cities have guidelines for parking e-scooters. Fortaleza, for example, requires that scooter companies create specific spots to park up to 10 scooters, in many cases by widening sidewalks near intersections. This measure not only provides a designated parking area for scooters but can also act as a traffic-calming mechanism, improving road safety. Scooters must start the day in their designated parking spots, and then users are free to park them on any sidewalk, as long as they leave enough space for pedestrians and don’t interfere with private parking spots. Companies have three hours to collect incorrectly parked scooters, and they can be fined for not doing so. While Fortaleza does not currently have any e-scooter companies in operation, it has released these regulations in anticipation of their imminent arrival.

São Paulo has a similar policy, requiring that e-scooters park in designated spots proposed by the companies and approved by the local transport authority. Both users and companies can be fined for incorrectly parked scooters.

Rio de Janeiro and São José dos Campos are the only cities that require companies to pay specific scooter taxes. In Rio, the tax is based on the e-scooter operational area and the value of that land. Scooter companies also have to pay a one-time fee of BRL 30 (around $7.50) for each registered scooter.

In São José, companies pay an annual registration fee of BRL 5,000 (around $ 1,254) per company and 5% of their monthly revenue from scooter trips. The taxes go toward the city’s urban mobility fund, which prioritizes sustainable transportation. São Paulo has also decided to set taxes for e-scooter companies, though the specifics are still being determined.

Aside from Florianópolis, all cities have regulations for data sharing. Recife, Rio de Janeiro and São Paulo are the most specific about what data must be provided by e-scooter companies. Recife asks that data related to e-scooter operation, including the number of trips and routes, be shared with the municipality on a daily basis.

In addition to sharing data on scooter trips and routes, São Paulo requires that all scooter-related crashes reported to the companies be shared with the local government. In each city, all regulations on data sharing require user data to remain confidential.

The new mobility landscape is complex and always shifting. Brazilian e-scooter companies have plans to continue expanding domestically and in other Latin American cities, and global companies are also arriving on the scene. What’s more, questions around public space and safety are important to consider not just for scooters but for all vehicles on the road.

To keep up, cities need to implement, evaluate and reform regulations quickly, working alongside companies and the public to deliver a transport network that works for everyone. WRI and NUMO are conducting research to learn more about these regulations, as their impact is still largely unknown.

A version of this blog was previously published on WRI Brasil.