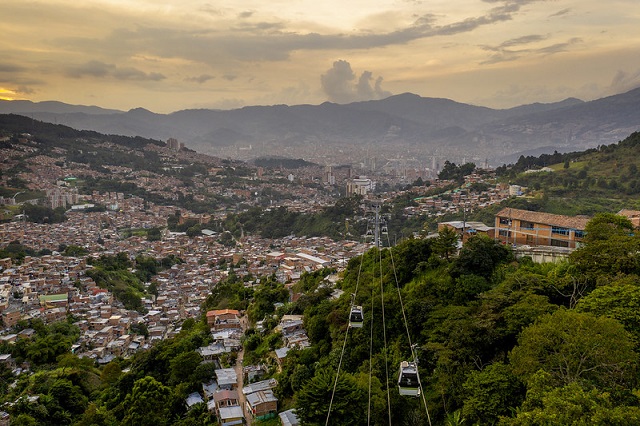 Since the landmark Paris Agreement on climate change, adopted in 2015 and signed by 175 countries on Earth Day the following year, global momentum to tackle the climate emergency has been building. Progress has been made on almost every front, from bold corporate emissions-reduction targets and plummeting renewable energy prices to a surge of support for net-zero targets and Greta Thunberg being recognized as Time Magazine’s “Person of the Year.”

At the same time, the progress has not been anywhere near fast enough. The climate movement has faced plenty of troubling headwinds over this period. President Donald Trump started the process of withdrawing the U.S. from the Paris Agreement last fall. Before the COVID-19 pandemic, emissions had continued to creep upward year after year, and that trend may well resume after the virus gets under control. Last year was the second-hottest on record globally, and the first few months of 2020 have seen historic monthly highs as well. Communities around the world continue to be devastated by tropical storms, wildfires, droughts, floods and heatwaves – many exacerbated by the climate crisis. We still have a lot of work ahead of us.

COVID-19, while first and foremost a social and economic crisis, will also impact efforts to advance climate action. On the one hand, most leaders are not focused on climate action these days, and the COP26 climate summit scheduled for November in Glasgow was postponed until next year. On the other hand, this health crisis shows that countries can respond rapidly to a global emergency.

As we approach the fifth anniversary of the Paris Agreement, here are five ways the world has shown it’s ready for more ambitious climate action: 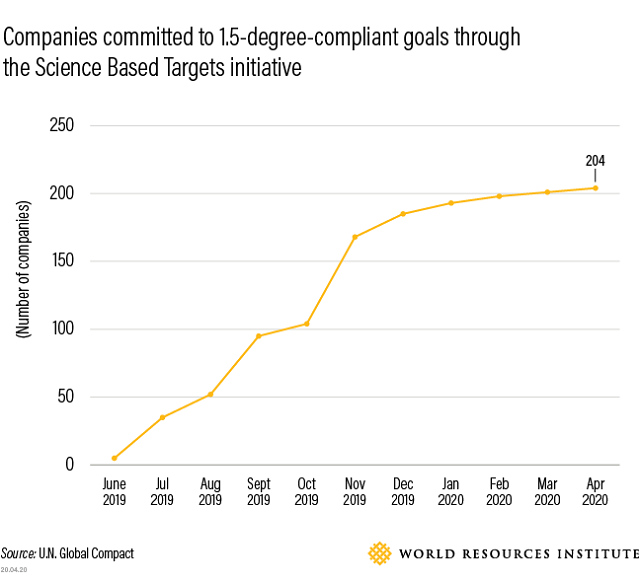 Private sector leaders increasingly recognize that transitioning our high-carbon economy to one built on low-carbon activities is not only essential to limit dangerous climate change impacts, it’s also good for companies’ bottom lines.

Under the Science Based Targets initiative, over 850 companies have so far committed to set emissions reduction targets based on the science, and more than 200 have committed to set net-zero targets across their operations and value chains. The net-zero targets align with limiting warming to 1.5 degrees C (2.7 degrees F). Collectively, these high ambition companies – including many globally recognized brands, from Chanel to Nestlé – represent $3.8 trillion and have an annual carbon footprint larger than the annual emissions of France.

Companies’ approaches to cutting their emissions vary. For example, 230 are committed to transitioning to 100% renewable energy, including Nike which already powers all its North American facilities through renewables. Kellogg and Unilever are among 53 companies that pledged to stop commodity-driven deforestation from their supply chains by this year. Sixty-eight companies – including Air New Zealand, Baidu and HP – have joined EV100, a worldwide initiative seeking to accelerate the transition to electric vehicles by 2030. And IKEA and H&M – companies known globally for the affordability of their products – are exploring ways they could profit from repairing and reselling products in a circular economy.

Many of these companies are leaders within their sectors and are setting a new standard for what corporate climate action should look like. Microsoft, one of the world’s largest companies, will shrink its carbon footprint and invest in carbon removal solutions with the goal of becoming carbon negative by 2030.

More than half the world’s population lives in cities, and the U.N. predicts that percentage to grow to two-thirds of humanity by 2050. As a result, how cities act now against climate change will have direct repercussions on the lives of billions.

Worldwide, almost 400 cities have committed to reach net-zero emissions by 2050, and more than 10,000 have joined the Global Covenant of Mayors for Climate & Energy. In the United States, cities are a major player in America’s Pledge, a coalition of cities, states and businesses committed to fulfilling the Paris Agreement’s target despite the Trump administration’s withdrawal. Together, these entities account for almost 70% of the U.S. economy. If they were a country, their economy would be larger than China’s and second only to the full United States.

Many individual cities worldwide are also taking commendable action to reduce emissions and create better lives for their residents. In Medellín, Colombia, the installation of an aerial tram system called Metrocable is linking low-income hillside communities with the center of the city and thus boosting access by residents to jobs, education and other services. The mayor of Paris has made her plan for a “15-minute city”, where residents can meet all their needs within 15 minutes of traveling from home, a cornerstone of her re-election campaign. And in China, the city of Shenzhen more than tripled its number of electric buses since 2015; and is now the first city in the world to electrify 100% of its bus fleet.

Others are focused on adapting to a changing climate. In the northern Indian city of Gorakhpur, city officials are encouraging a range of tactics, from reducing monoculture to protecting water bodies, to reduce flooding and boost resilience as monsoons get stronger and more unpredictable. To help all cities reduce emissions and weather climate impacts, WRI and C40 have created a roadmap for equitable city climate action that will include and benefit all residents without leading to unintended burdens on poor and otherwise vulnerable communities.

To shift onto a more sustainable path, the world’s leading public and private financial institutions need to not only invest more in the new clean alternatives, but also stop investing in the old polluting technologies. In the wake of the COVID-19 crisis, it is expected that governments and development banks will provide unprecedented levels of investment to reflate economies and generate jobs. As they do so, there is strong evidence that it would be prudent for these investments to be targeted to projects that are low carbon and climate resilient. South Korea provides a good example; after the 2008-09 economic crisis, the country invested more in green stimulus measures than any other OECD country – and was one of the countries that rebounded the quickest.

The European Investment Bank (EIB) plans to stop funding oil, gas and coal projects at the end of 2021, a first-of-its-kind move for an investment bank. EIB also joined other multilateral development banks in releasing a joint statement projecting that they will double adaptation finance to $18 billion a year by 2025. Meanwhile, more than 130 private banks – representing one-third of the global banking sector – have signed onto the Principles for Responsible Banking, a framework that seeks to align banking practices with the Paris Agreement.

At COP25 in Madrid in December, 16 major institutional investors with almost $4 trillion in assets committed to net-zero investment portfolios by 2050. In January, BlackRock, the world’s largest asset management firm which alone manages $7 trillion, announced that it was shifting its financial strategy to center around climate change. With this move, it joined more than 370 other investors in an initiative called Climate Action 100+, whose members are engaging companies that produce two-thirds of global industrial emissions. 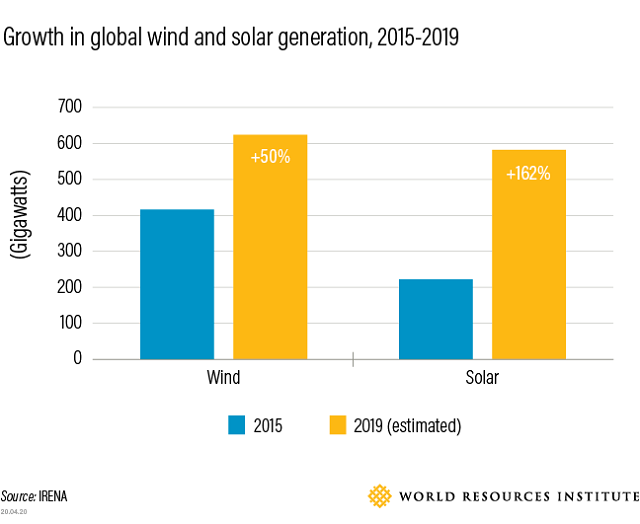 Renewable energy is increasingly cost-competitive with coal. Between 2010 and 2019, solar prices dropped 90%. In sunny regions around the world, it’s already cheaper to get electricity from solar than fossil fuels. Similarly, the cost of wind power has declined significantly in recent years, and is cheaper than natural gas in some regions, including parts of the United States.

As prices drop and adoption of renewable energy expands, so does the industry behind it. In the U.S., clean energy already employs almost 3.3 million Americans, more than fossil fuel generation.

The last few years have also seen further signs of technological progress toward tipping points for a zero-carbon future. Electric vehicle technology has improved so quickly that an increasing number of major automakers including Toyota and Daimler are planning to stop making internal combustion engines. Iron and steelmakers, which have struggled to reduce greenhouse gas emissions, are now exploring using hydrogen as a clean fuel to replace carbon within their industrial processes. Knowledge about the opportunities to sequester carbon in trees and soil, as well as how to sequester carbon industrially, is also advancing rapidly.

Last year, Greta Thunberg and other young climate activists exploded onto the global stage with their weekly school strikes, known as Fridays for Future, protesting the lack of climate action by world leaders. Bolstered by other youth-fueled activist groups, including the Sunrise Movement and Extinction Rebellion, in September 2019, more than 7 million people across 185 countries joined the world’s largest climate strike in history to demand stronger governmental action.

But activists aren’t the only ones who want climate action. According to a September 2019 poll taken in the U.S., Canada, the U.K., Germany, Italy, Brazil, France and Poland, climate change ranks ahead of migration and terrorism as the most important issue facing the world. In a separate U.S. poll released in early 2020, the majority of both Republicans and Democrats think climate change should be a priority for the President and Congress this year, a 14% rise since 2016.

Next up: More Country-level Action

Seventy-seven countries, including many developed nations, are currently working toward some sort of net-zero commitment (in many cases “net-zero by 2050,” though some countries such as Denmark and Finland have earlier deadlines). However, these goals are meaningless if they are not reflected in ambitious actions that countries begin to take now, such as the national climate plans countries are slated to update under the Paris Agreement this year. So far, seven have already done so, but only 106 others have promised to follow suit. Slashing emissions can’t be done overnight; countries should use their short-term climate plans as steppingstones that can help them reach a net-zero future.  As countries around the world now start to consider how to reflate their economies following the COVID-19 crisis, they can use this turning point to accelerate investments in a low-carbon, inclusive and resilient economy to build back a better future for all.

Microsoft is a member of WRI’s Corporate Consultative Group. Nike, Kellogg, Nestlé, Unilever, IKEA and Microsoft have provided financial support to WRI. This blog post solely reflects the views of the authors.

Helen Mountford is the Vice President for Climate and Economics at World Resources Institute.