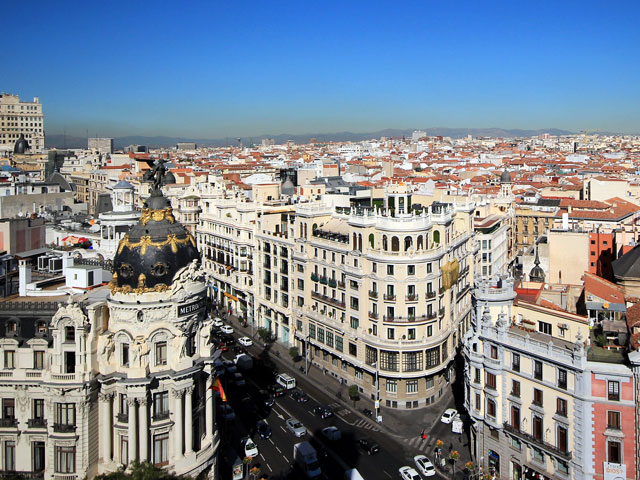 It has been a tumultuous time for the UN climate talks. The mass protests against social inequality in Chile prompted the country to give up its plan to host COP25 just a month before the annual talks were scheduled to begin in December.

But within a week, Spain offered to organize the event in Madrid on the same dates, an offer which the UN Framework Convention on Climate Change (UNFCCC) quickly endorsed ‒ the fastest decision made about a venue in UNFCCC history. This sudden solution to an unprecedented challenge was an inspiring display of friendship and recognition that climate change is an urgent priority. The recent trio of reports from the Intergovernmental Panel on Climate Change (IPCC) delivered a stark and powerful warning: our lands, our ocean and all of humanity are at grave risk if we don’t rapidly reduce greenhouse gas emissions.

The world must continue to build momentum ahead of 2020 so that all countries offer more ambitious national climate commitments next year. Spain and Chile have demonstrated a “can-do” approach to the climate challenge that should inspire the world and shape what is accomplished at COP25.

Here are four key tasks for countries at COP25:

The Chilean presidency defined COP25 as an Ambition COP. At COP21 in Paris in 2015, countries were asked to bring forward updated national climate commitments by 2020 (known in the UN as nationally determined contributions, or NDCs). And at the September 2019 UN Climate Action Summit in New York, many small and medium-sized countries sent a clear signal that they will strengthen their commitments next year. As of now, 68 countries have indicated that they intend to enhance their NDCs. As we move toward 2020, the world will be watching to see whether large emitters will follow that example. COP25 will be a moment to highlight those who are clearly ready to enhance their commitments and shine a spotlight on what’s needed from others next year.

While the Trump administration has rejected the Paris Agreement and established the United States as a climate loner, this is no excuse for other countries to dial back their climate efforts. The U.S. states, cities and businesses that remain committed to the Paris Agreement now represent nearly 70% of U.S. GDP and nearly two-thirds of the country’s population; if they were a country, they’d be the second-largest economy in the world, second only to the full United States and larger than China.

At COP25, high-level events are expected to bring ministers of energy, finance and environment together to align policies that will accelerate and scale up action and investments toward a low-carbon and climate-resilient economy. Countries should leave the summit with a good sense of key milestones for next year, with an indication of when the next round of national climate commitments are expected to be submitted, and when the UNFCCC Secretariat will produce a synthesis report of these NDCs that can help assess collective progress toward the Paris Agreement goals.

While the big deliverable of last year’s COP in Katowice, Poland, was the adoption of a 300-page set of guidelines to facilitate the implementation of the Paris Agreement, two issues could not be resolved: the use of international carbon markets ‒ covered in Article 6 of the climate accord ‒ and the length of the implementing period for countries’ NDCs, also referred to as the common time frame.

Establishing rules for carbon markets will be a priority for COP25. Fifty-one percent of all NDCs include markets as one of the means to achieve countries’ emissions-reduction goals. These approaches have the potential to drive cheaper emissions reductions while generating financing to transition to renewable energy and bolster resilience to climate impacts. But those rules must be designed so that they protect the environmental integrity of countries’ national climate commitments.

Without proper oversight and robust rules, Article 6 could severely undercut climate action. One way this could happen is through double counting, in which both the buyer and seller of carbon credits would claim the same emissions reduction in their national emissions records, and thus paint a false picture of overall carbon cuts. Another concern is that pre-2020 emissions reductions under the Kyoto Protocol could be allowed to be carried forward and counted toward countries’ climate commitments after 2020, weakening efforts to reduce emissions further.

Parties will also discuss the scope and amount of proceeds from carbon trading that will be set aside to assist vulnerable developing countries to help them adapt to a changing climate. Negotiators should ensure that the new system provides a reliable flow of finance to the Adaptation Fund.

At COP25 negotiators should make significant progress on rules for Article 6, but the top priority should be to ensure that they are environmentally sound, not to finalize them at all costs. Agreeing to weak or bad rules to meet an artificial deadline could do more damage in undermining climate ambition than delaying the rules another year.

In Madrid, negotiators should agree to a common time frame that requires all countries to execute their new NDCs during an implementation period of 2031 to 2035. This aligns with the five-year ambition cycle set in the Paris Agreement, and will provide greater predictability going forward. In addition, countries should be allowed to indicate plans requiring a longer (e.g., 10-year) time frame.

Another sensitive issue that negotiators will grapple with in Madrid is the review of the Warsaw International Mechanism for Loss and Damage (WIM), which was established in 2013 to address loss and damage associated with impacts of climate change in developing countries that are particularly vulnerable to the adverse effects of climate change. This includes losses and damages that go beyond what countries and communities can adapt to or recover from, such as loss of cultural heritage, land, lives and livelihoods.

At COP25, Parties will review the WIM’s performance: what lessons have been learned, what are the gaps and opportunities, is the WIM effective and efficient, is it useful and responsive to developing countries, is it catalyzing collaboration and partnership, and is it properly resourced? They will also review the long-term vision for the WIM, which has implications for ways in which it may be enhanced and strengthened. Parties will no doubt pay particular attention to how the WIM has, over the past six years, enhanced action and support for averting, reducing and addressing loss and damage associated with the impacts of climate change ‒ and what can be done to strengthen this particular function of the WIM, including through the possible establishment of a taskforce on loss and damage finance.

Developing countries ‒ particularly those most vulnerable to climate change ‒ cannot step up climate action without financial support from developed ones. So far, 28 countries have confirmed $9.7 billion in pledges to the Green Climate Fund’s replenishment; 12 of those countries have at least doubled their contributions compared to 2014. This is a positive step, but many more countries should contribute, including Australia, the United States and wealthy oil-producing states. Developed countries that have not yet doubled their contributions should do so. Additional financial commitments at COP25 would build trust and empower more countries to strengthen their climate commitments in 2020.

Decisions on capacity-building are also expected at COP25. In 2015, countries established the Paris Committee on Capacity-building to enable countries to fulfill their more ambitious and stringent commitments and foster their transition to a low-carbon and climate-resilient economy. This year, countries will need to decide whether and how the Paris Committee and other UNFCCC bodies will continue to help countries close the gap between potential and reality.

Addressing the intersection of climate action and social equity may draw much greater attention at these UN climate talks than in the past. This is partly the result of the social unrest in Chile (and increasingly many other countries, too), but also an outgrowth of rising attention to these issues more broadly in climate discussions, including the focus on just transitions, health impacts and gender at the recent UN Climate Action Summit. Too often, countries have not considered how their climate actions could affect equity in their societies. If designed well, climate policies can improve equity ‒ but they must be designed with that in mind, or they risk exacerbating inequities rather than reducing them. As countries progress toward ever more ambitious climate commitments, the importance of ensuring that no one is left behind in the transition will be even more essential.

A Positive Outcome at COP25

The Madrid climate talks provide an opportunity for climate leaders to articulate how their efforts to combat the climate crisis will both support their broader sustainable development agendas and specifically address social inequity. By embracing the “can do” spirit, COP25 can be a springboard to COP26, when the world will be watching and expecting to see a collective increase of ambition of climate action and support.

David Waskow is the Director of the International Climate Initiative at World Resources Institute.

Christina Chan is the Director for the Climate Resilience Practice at World Resources Institute.

Joe Thwaites is an Associate in the Sustainable Finance Center at World Resources Institute.

Kelly Levin is a Senior Associate with the Global Climate Program at World Resources Institute.