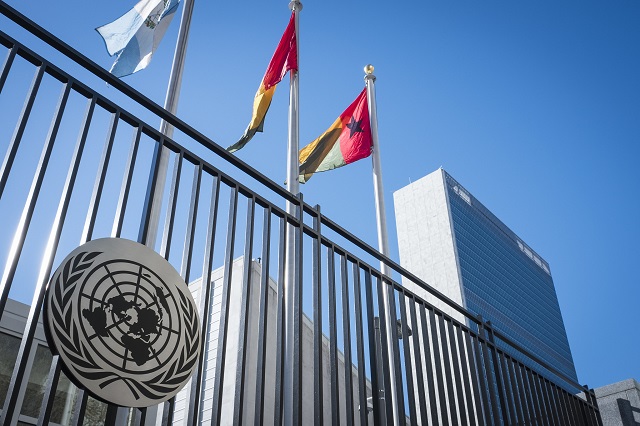 World leaders will soon gather in New York City for a summit on an urgent challenge that affects every aspect of our lives, from the economy to jobs, security and migration and our health. It is, of course, the climate crisis.

The tens of thousands of fires recently afflicting the Amazon rainforest may have been started by humans, but the tinderbox conditions of a drier Amazon can lead the blazes to spread very quickly. Similarly, temperatures in the Arctic are hitting record highs, and a scorching summer in the Northern Hemisphere left hundreds of people dead and hundreds of millions more desperate for relief. New analysis by The Washington Post found that 10% of the world is a dangerous hot zone that has already warmed over 2 degrees C (3.6 degrees F).

If there is a silver lining, it is that the reality of the worsening impacts around the globe and dire predictions of impacts to come have galvanized a global citizen movement calling for climate action from their leaders. Young people in particular are capturing attention through school strikes, and people everywhere are demanding that we start calling this situation what it is: a crisis that requires urgent action. More companies, investors and individuals are also recognizing that a low-carbon and climate-resilient growth path is also an important economic and development opportunity. Innovations and falling costs in clean technologies ‒ such as with renewable energies, battery storage and electric vehicles ‒ and an awakening of the financial markets to the risk of high-carbon growth are reinforcing that change. In short, the real world is moving faster than the politicians. It’s time for national leaders to now step-up and help, rather than hinder, the global transition underway.

It is in this new context of awareness that world leaders will gather for the United Nations’ Climate Action Summit on September 23. The last UN summit of this kind, in 2014, was a major political milestone that helped catalyze the adoption of the Paris Agreement and the submission of national climate commitments from nearly 200 countries the following year. UN Secretary-General António Guterres is organizing the 2019 summit in pursuit of a similar goal: to generate much-needed political momentum heading into 2020, when countries need to accelerate action and strengthen their national commitments at a scale commensurate with the climate challenge.

The 2018 report from the IPCC revealed that, while the world will face major climate impacts even with 1.5 degrees C (2.7 degrees F) of warming, the effects get significantly worse with warming of 2 degrees C (3.6 degrees F) ‒ with greater exposure to extreme heat, plummeting crop yields, less productive fisheries and much more. Limiting warming to no more than 1.5 degrees above pre-industrial levels must be the new North Star that guides climate action for all of us ‒ countries, cities, businesses and civil society. We must dramatically cut emissions across the global economy while building resilience and adapting to the serious climate impacts that are inevitable. The UN summit in New York is the first chance since that report to put heads of state in the spotlight and demand a response.

To move toward a 1.5-degree pathway, Secretary-General Guterres has called for all countries to commit to shrinking their net greenhouse gas emissions to zero by 2050, as the IPCC report made clear was necessary at the global level. The nations of Suriname and Bhutan are leading the way, as they already absorb more greenhouse gases than they emit. So far, 15 other countries have adopted or proposed legislation with a net zero emissions goal in mind (some on even shorter timelines than 2050). This includes developed countries such as Norway, Sweden, New Zealand and the United Kingdom, as well as developing countries like Chile, Uruguay, Costa Rica, Fiji and the Marshall Islands.

The commitments made thus far are inspiring and necessary, but we need similar action by many more nations, especially the biggest emitters. At the UN Climate Summit, leaders should reassure the public and their peers that they will take the steps necessary to decarbonize their economies by mid-century or earlier.

Recent research in Indonesia, Mexico and China for example highlights the benefits to countries of doing so. For example, earlier this year the Indonesian government’s Low Carbon Development Initiative found that if the country shifts to a low-carbon development pathway, it could deliver an average of 6% GDP growth per year until 2045 ‒ better than the current economic growth pathway ‒ as well as more jobs, better health outcomes, and regional and gender benefits.

Countries can continue resisting the inevitable, or they can seize this immediate opportunity to deliver more equitable, sustainable growth and a competitive low-carbon economy. This summit is the moment to accelerate the transition to a brighter, safer future.

2. Prepare to Strengthen their National Climate Commitments under the Paris Agreement by 2020

When the Paris Agreement was signed in 2015, nations agreed to boost the ambition of their national climate commitments ‒ known in U.N. circles as nationally determined contributions or NDCs ‒ every five years. Guterres is calling for all countries to ramp up national commitments in 2020, aligning these near-term goals with the aim of keeping temperature rise below 1.5 degrees C. At this summit, it is vital that presidents and prime ministers ‒ especially those from the largest emitters ‒ make clear they will put forward ambitious national climate targets next year. This will be a critical signal of whether the world will live up to the goals of the Paris Agreement.

In recent joint statements with France, India and China indicated that they will update their national commitments under Paris “in a manner representing a progression beyond the current one and reflecting their highest possible ambition,” and also committed to submitting long-term climate strategies next year. Leaders from these countries and from other major economies need to come to the summit prepared to announce they will step up their Paris commitments.

When these new national climate commitments are put on the table next year, they can include not only targets on reducing GHG emissions, but also policies on everything from accelerating the adoption of renewable energy, investing in electric vehicles, reducing food loss and waste, to protecting and restoring mangrove forests that sequester carbon and shelter coastal communities from storms.

3. Advance Other Initiatives and Funding That Will Help Make a Zero-emissions Future Possible

During the summit we expect that many cities, states and businesses will unveil new initiatives or bolster existing efforts to address the climate crisis. Some of these announcements could be game changers for climate action. Many of these initiatives will be undertaken together with national governments, and all should underpin setting stronger national climate commitments and reaching countries’ net-zero goals. Simultaneously, national climate action can send clear, stable signals to encourage even greater action and innovation by cities and the private sector.

For example, cities can save consumers hundreds of billions of dollars in energy costs by transitioning to net-zero buildings. Governments and companies can work together to set targets to increase the proportion of vehicles on the road that are emissions-free. Twenty-eight major companies have already pledged to meet the 1.5 degree C target; hopefully, many more will follow their lead at the summit.

The summit is also a major opportunity for leaders to show that the global economy is undergoing a fundamental shift from “brown” to “green” financing that will transform our industrial and transport systems and provide clean jobs. One critical step in that direction is to halt the funding and building of coal plants, which are the world’s greatest source of carbon pollution. New coal power is also increasingly more costly than renewables, and once the health costs of air pollution are included, coal looks like an even worse economic deal. Essential to success will be the careful management of the transition, to ensure they are just and leave no one behind.

And as always, ambitious pledges are not enough if there isn’t money to back them up. Developed countries must increase financial support for climate action in developing countries, which are often the most vulnerable to its effects. This must include significantly ramping up investments in climate resilience to protect communities from climate impacts such as drought, sea level rise and extreme heat. A recent report from the Global Commission on Adaptation finds that investing $1.8 trillion globally in climate resilience from 2020 to 2030 could generate $7.1 trillion in total net benefits.

A Livable Planet for All

On September 20 and 27, concerned citizens ‒ led by youth activists ‒ will flood the streets demanding that global leaders wake up to the reality that an incremental approach to climate action is nowhere near enough: To combat climate change we need system change.

Government leaders and the UN also have other urgent, important objectives on its radar, including reducing poverty and enabling sustainable development and halting the extinction crisis. However, there is a growing recognition that any one of these objectives cannot be achieved in a silo: without tackling climate change, all other goals at are risk of becoming out of reach, and vice versa. The UN Climate Action Summit and the SDG Summit that follows it are a unique opportunity to link these agendas and demonstrate how actions to cut emissions, decarbonize industries and adapt to increasingly severe impacts can help to build a better future that includes quality jobs, stronger economies, better health and food for all. This is the new growth story of the 21st century.

Helen Mountford is the Vice President for Climate and Economics at WRI.